So, has anyone made it to Last Man Standing yet?

This came up on that other pinball forum today and I’m wondering if any of the higher-end players that frequent this forum have made it to Last Man Standing on TWD legitimately yet, and whether or not they changed the default walkers lit to make it a bit easier.

I’d prefer not to see spoilers on the mode itself, just wondering if anyone’s managed it!

Sweet. About how long did it take you to get there Keith?

I don’t have one near me but all the talk about the new software is making me want to go find one.

Took about 30 min but it was on an LE and all I was doing was going for kills. I would be EXTREMELY impressed if someone could pull this off on a pro

What makes the difference in LE vs Pro for kills?

Shouldn’t have set the challenge! One attempt, sheesh…

I didn’t see this topic covered on Tilt’s TWD wiki sheet… and figured this thread makes the most sense to post this question:
Do multi-kill shots award MULTIPLE walker kills in one shot?

Here’s a copy/paste of what I posted on a Slimside thread on Last Man Standing regarding my idea for multi-kills:
"Instead of using the PFx or the inlane X, which are already lucrative enough for scoring, I think a reasonable way to award more walker kills would be to make every stacked multi-kill shot (within the same ball) award +1 walker kills. It is, in fact, called a MULTI-kill. You should get credit for MULTIPLE kills on multi-kill shots. Or is this already the case, and I just haven’t noticed?

Further, if you qualify multiple multi-kills on one ball, your # of walkers killed per multi-kill (MK) should increase.
Example: You start your first MK on ball 1. You shoot an MK shot. Instead of just getting 1 additional walker kill, you get two (1+1, because you’ve started one MK). You shoot the next shot that’s lit for MK, and once again, get credit for 2 walker kills on that shot.

Once you drain out of ball one, and no longer have a MK lit for ball two. When you qualify your first MK during ball two, you’re back to your MK only being worth 2 kills per MK shot.

I think this would be a great way to make multi-kills worth shooting for when you’re playing for walker kills, because it provides incentive to play modes/MB’s well enough to qualify your MK shots.
Thoughts?"

I think that is a good idea on a pro. On an LE I think it may then be too easy to get LMS (Keep in mind LMS is worth a shit ton of points so it should be hard to get to)

Another option is for horde kills to also count towards LMS. Right now if you are just a few away from LMS horde will block your path and I have actually timed it out to get LMS instead of risking draining out during Horde.

I think anything that shows a walker being killed on the DMD should count as a walker kill, it just makes sense. I don’t think that they gave themselves enough wiggle room with the “light all the zombie inserts and get a wizard mode” when designing the playfield, now they have to fit the rules into the inserts rather than the other way around.

If I was writing the rules at this point, I’d put a whole ton of zombie killing into the game, award a kill whenever a zombie is ostensibly killed, and bump the requirement to 230 kills (complete all the inserts twice). Have the inserts flash when they are worth 2x face value. People that care will know what that means, and it’s more fun for everyone else. Right now the zombie killing in the game isn’t tied into the number of kills you’ve achieved according to the inserts and bonus well enough. 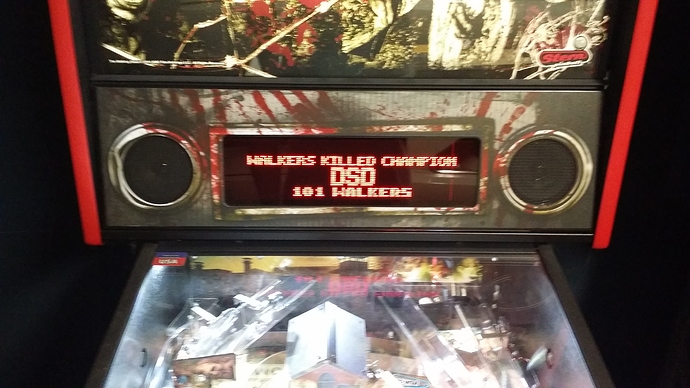 This machine (not mine) was set to 4 walkers lit instead of 3 so LMS was easier to achieve.

a finished LMS is worth 1.7B in itself. Very lucrative mode. And fun to play as well

Do you have a strategy besides shoot walkers? I went through the MB’s without stacking and shot walkers avoiding tunnel and riot. I should have timed out Horde!

Yeah pretty much did as you said but didn’t avoid riot. If there is any downside to the code at this point it’s that the prison jackpots as well as siege points aren’t enough of a carrot for me to actually try shooting jackpots over using prison to work kills, bloodbath and mode points.

Sorry for the stupid old dead thread bump but… 771 days later… I finally got to LMS on my pro!! lol