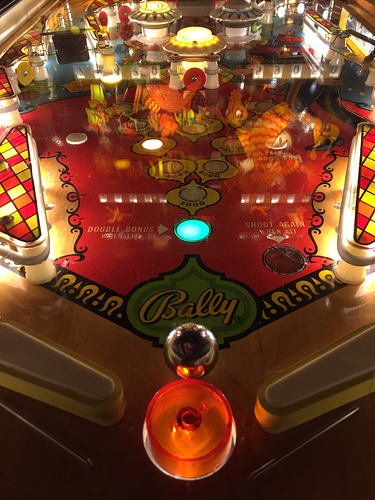 Personally, I feel completely confident about my ruling in this situation. I’m just posting this in response to the chorus of mumbles 'n grumbles and immediate texts to PAPA Doug that followed.

In this case, the game is Bally Amigo. It has the “Play-More” post, more commonly referred to as an “up-post”. The touch-target in the middle of the playfield raises it, and the rollover buttons near the tops of the slings drop it.

Player hits center target, up-post raises, ball drops directly onto up-post, and stops right where you see it in this picture.

My ruling is “stuck ball”, and place ball in shooter lane. Arguments could be made for placing on either flipper, but shooter lane is just the standard at this location.

Since the ball was stuck on a post above the flippers, and since the ball rolling off either side of the post would safely land on a flipper, I see no reason why this should be treated the same as a ball stuck on a “center post”, like on PIN-BOT, T2, etc…

Interesting. Yeah, I guess if the player can’t move the ball with their flippers (which I think is the case for any ball at rest on top of an up-post), then I would agree that it’s a stuck ball. But I would have probably put it on either “at rest” flipper lodged up against the post, and not cradled on a flipper. Depending on the game, getting an extra plunge / skill shot from a stuck ball is too advantageous. But I’m not that familiar with Amigo.

This is my favorite way to handle stuck balls because I don’t like to spend time opening games for no reason:

A tournament official may initially choose to try to free the stuck ball through judicious nudging, tapping, etc. The player must remain ready to resume play at the machine during this attempt.

When facing a situation like this it’s amazing how eager players are to do their own nudging when presented with the alternative that I will be doing some nudging before opening the machine.

At least on this Amigo, it’s all about lighting the spinner and ripping it, which a plunge generally doesn’t help with much. He actually would be in a much better place with a ball on the flipper. It’s also easy enough to faux-tap-pass to either flipper over the post. So placing ball at either flipper tip would probably be the fairest move, and most likely how I will proceed in the future.

Or just throw the post in the dumpster and fill the hole with bondo.

Since the ball was stuck on a post above the flippers,

The rule reads: “A ball which has come to rest on top of a center post, an inlane-outlane post/guide or a lamp insert/playfield divot directly above an outlane will not be considered a stuck ball.”

It doesn’t give any consideration on if the ball on the center post is above or below the flippers.

I know, I just feel like the “spirit of the rule” does not apply to this particular situation.

IIRC, that same rule goes on to say that any tilt warnings given to the player by the official does not award any compensation, so play on.

I think you should have enforced the rule as written and made them nudge it out or take a drain. I don’t think its fair to players to change the rules mid-ruling when you come across an edge case. All you can do imo is change the rules for the future.

That said, the rule should be re-written to say something to the effect of “Stationary Post.”

That’s how I imagine we would have written it the first time had we though about the implication of up-post being considered in the ruling.

It’s a fun rule, and each revision its gotten better at more directly covering the intended spirit, which is: “if that shits about to drain, you don’t get out of jail for free.”

I didn’t view this as changing rules mid-ruling at all.

In my mind, an up-post is different enough from a “center post, an inlane-outlane post/guide or a lamp insert/playfield divot” that I didn’t even consider applying that rule.

To me, this is just a ball stuck on a playfield object. Not any different than a ball stuck under Wolverine’s arm, or on an unlevel PIN-BOT visor during mb, or a drop target bank directly above the drain hole on a machine too old to have ball search.

Quite clear to me at least, and from that perspective I still feel like I made the right call.

That said, I certainly agree that this is a good opportunity to make a revision for clarification in the future. Clearly this was not as obvious to others as I assumed it would be.

Center Post —
A stationary rubbered post or pin set between and inline with the bottom pair of flippers. Gottlieb/Premier used a center post on many of their games. Not to be confused with an Up-post.

This was my ball on Amigo

I put forth a pretty good nudging effort to try to free the ball myself before calling over @ClevelandPinball to deal with the situation (I had tilted with a pretty light move earlier in the game so I was reluctant to get too aggressive with my nudges). I had never heard about this rule so I was surprised to hear talk of it possibly not being a stuck ball.

I think it was the right call (naturally :P) as the ball was never really anywhere near a possible drain in the process of becoming stuck nor would it have been in danger of draining after any kind of nudging to free it which seems to be the main spirit of the cited rule from what I can gather.

“A tournament official may initially choose to try to free the stuck ball through judicious nudging, tapping, etc. The player must remain ready to resume play at the machine during this attempt. If actions by the official result in a Tilt, this will be treated as a major malfunction (not the fault of the player). If the official frees the ball but the player does not successfully continue play, this is normal play (the fault of the player). Loss of Tilt warnings due to tournament official nudging is considered normal play.”

My response as the player in this situation:

IMO as a TD I would have just tapped the ball onto a flipper not put it in the shooter lane.

As a player, I’m with Josh, go ahead TD, shake the machine, I can wait. I’m getting a ball on the flipper regardless of the outcome.

So… to you, it is a stuck ball? Because to me it’s resting on a center post. (Looks like that is being debated, ok.)

I don’t understand the logic of telling the TD to make a big shake, the TD should not offer any help if it’s a center post, and the usual help if it’s a stuck ball.

Absolutely. This is not a center post, nor was it ever even close to being in danger of draining, like it would have been on a true center post. Honestly, draining this ball or even forcing the player to nudge would have felt totally absurd.

And yeah, the “TD shake” thing might be ok on location games where you don’t have keys sometimes, but otherwise is totally inappropriate.

So… to you, it is a stuck ball? Because to me it’s resting on a center post. (Looks like that is being debated, ok.)

I don’t understand the logic of telling the TD to make a big shake, the TD should not offer any help if it’s a center post, and the usual help if it’s a stuck ball.

To me personally I’ve never considered a mechanical up-post the same as a center post.

IMO the spirit of the inlane/outlane/center post stucky rule was as Cayle mentioned . . . players in essence were trying to use a get out of jail free card for a situation where their ball had a non-0% chance of draining from the position it was in. In the picture above, I would argue that the ball has a 0% chance of draining based on the position of where the ball is ‘stuck’.

There’s a reason players would attempt to shake their own ball loose on an inlane/outlane situation (versus allowing the TD to attempt to dislodge it for them), and that’s because they want control over that skillful nudge. In this situation there is no skillful nudge possible. All paths lead to the ball falling onto the rested left flipper or the rested right flipper.

If I were going to rule in this situation I would first wait and see if the game can ball search. If it can and the Up-post is part of that ball search, that player better get ready to make a save. Assuming it’s on an old EM/SS and that post isn’t moving, I would absolutely deem that ball stuck.

I hate to say this, but if these very experienced tournament directors (and the ones who wrote these rules) are applying different provisions to a single situation, the rules do need to be adjusted.

different provisions to a single situation

The debate here is that this isn’t a ‘single situation’ (center post ruling). The debate is the differentiation of a mechanical Up-Post from that of a “center post”.

The powers at be will climb up to the top of the tallest mountain in all the land and ask the Pinball Gods for an update to the verbiage.