I wonder if those banks are for real or not? Spider-Man, King Kool, High Speed, and Flash were in a bank last year, and let me tell you it takes 4 A players forEVER to play that bank. It wouldn’t stick with me so much but it was going into dinner.

If memory serves, I believe that has been “revised.” Don’t quote me, though…

That was a fun bank Keefer ;D

No fireball this year. Think of all the DQs you’ll miss out on.

And Who dunnit is back to keep things moving along. I can just see round 1, Cayle against someone in their first event.

I made the same comment on FB. People told me it was the info from last year, but it says 2016 AND includes games that didn’t exist last year. I basically am just saying the same thing you said, but yeah, agreed.

Looks like I’m seed 649. Maybe that’s good? Won’t know till the rounds are posted I suppose.

Yeah I could’ve anticipated a couple of 4M+ High Speed scores, and of course longer Spiderman games, but I don’t think anyone would’ve ever expected a game of Flash to last 45+ minutes.

A few of the banks listed there have changed. The info on that link is a little old.

Thank you for replacing HRC with Sopranos. Big improvement!

The long bank for me last year was POTC, Argosy, Hook, and Fathom. The 4th game was POTC and myself,Steven Zahler, Mats Sahlberg, and Jake Peterson played it so long they yanked it from the tournament as soon as we were done.

Thank you for replacing HRC with Sopranos. Big improvement!

oh btw Keefer i found a bug in WPT yesterday

Not surprising. There’s apparently a bad one that blocks progress sometimes in tourney mode that I didn’t know about before I got canned. Certainly has something to do with hand generation when creating “random” hands of specific hand types.

This one was that I somehow got to a state where all drop targets were completed but I couldn’t make “royal flush” and spin-a-card would give me “invalid” too. It was still a nice game though, probably closest i’ve been to your invitational

That IS a strange one. Never heard of something like that before. Shouldn’t be possible obviously. Even if something was spotted via hardware fault it should still have worked.

Sorry Keith! I didn’t even realize that was one of yours. I’m just not a fan of that game.

However, Gomez dropped Avengers on us so I’d call it even!

HRC is clunky as hell but really is a pretty good game. I played the crap out of it back in the day…

Pinburgh banks revealed. All games subject to change without notice.

Here they are in case you don’t or can’t use Facebook: 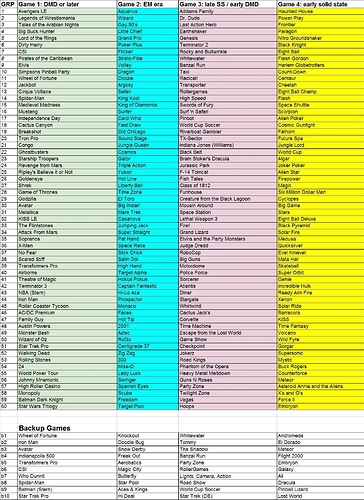 I was coming over here to post this, but you beat me to it!

Also, if you haven’t purchased your event pass yet, please do so. You need an event pass to get into Pinburgh. You certainly don’t want to be standing in line at the ticket booth waiting to buy your event pass Thursday morning.

I just got finished playing a game of Whirlwind and got back to my desk to find three work emergencies I needed to deal with and also the full Pinburgh bank list info.

You’ll never guess which one got the priority.