Hey. WWE after those last 2 updates is a pretty decent game. Better than some of the other moderns in that list, IMHO.

Is Loki (or whatever the lockup one is) multiball on Avengers even going to be possible with the new changes? With inlanes going RS-style, inlanes clearing on drain, and ramp always diverting to the left, seems like it’s a total luck show now with no legit feed to the right inlane?

I didn’t find it to be of too much importance in papa qualifying. In every game I played I did end up starting Loki MB, but it seemed more a matter of patience than luck. You would always get the one light from a soft plunge, and the other light usually came from a drop catch. And if you want to make your own luck you can always alley pass.

I don’t think ramp always goes to the left. Ramp diverts to right on soft plunge skill shot and when Hawkeye mode is started I think. I haven’t played in a while but it seems like there are plenty of times when it goes to the right inlane, but it does take more shots than it used to because at first the ramp will always divert to the left.

OK I guess that’s good. I swear I read somewhere when the ramp setting was set to COMPETITION that it always went to the left, but I can’t seem to find that anymore.

I swear I read somewhere when the ramp setting was set to COMPETITION that it always went to the left, but I can’t seem to find that anymore.

Loki MB on PAPA’s Avengers setup is definitely in play. The way PAPA’s Avengers was set up for IFPA (and I assume the same as it was for PAPA19), the Hawkeye ramp ALWAYS fed the left inlane, by design. See @PinballNarcissist’s comments above on how to get the other letter in K-I. Both those options worked for me when I played it at IFPA.

I think the new code always divert to left side, it makes the left pair of inlane/outlanes much harder to get if you have ball save off so you can’t double short plunge

WWE after those last 2 updates is a pretty decent game. Better than some of the other moderns in that list, IMHO.

I wish I had one available to try out the new code. For those of us that don’t have a WWE locally to play: do you mind sharing a few go-to strategies for playing WWE new code in match play competition?
Or perhaps @ScoutPilgrim could chime in, too? (he wrote an incredibly detailed summary of the changes)
Or does someone have a link to new code gameplay video?

it isn’t so difficult, just shatz it… I did it always in PAPA qualifying, when I needed it

I do not own the game but play it in league sometimes. My knowledge is limited but here’s what I remember. Skillshot always go for Advance Tag Team, except that is not available on the very first plunge so I usually take Advance Signature Move. Tag Team MB is where the points are. To do this, first you have to complete the 1,2,3 on the ring and get the ball in the hole(not always easy to do). Next you need to hit the Tag and Team stand-ups next to the ramps twice each. This light either ramp to begin Tag Team MB. During TTMB you need to get the ball in the hole in the ring for a big jackpot. BUT, the cool thing here is there is a 2x playfiled and add-a-ball just like Metallica. During MB, shoot the Tag and Team stand-ups once each. This lights the Tag Team lane on the far left for 2x playfield and add-a-ball. The subsequent Tag Team MB’s require more shots to the Tag team targets to start and get progressively harder to start. Super sweet to get the Tag Team JP at 50M and have it doubled to 100M, and that is totally doable on a longer game.

I would say the hardest thing is trying to aim the ball with the kickers in the ring. Timing is weird, and the sweet spot is NOT in the center of the slingshot, but just above that, like in the top third of the slingshot. Also, do not be afraid of pounding the flippers during MB while balls are in the ring. You might think you’ll look stupid to other players, until they see your score! Here was my best score on location right after the new code came out. 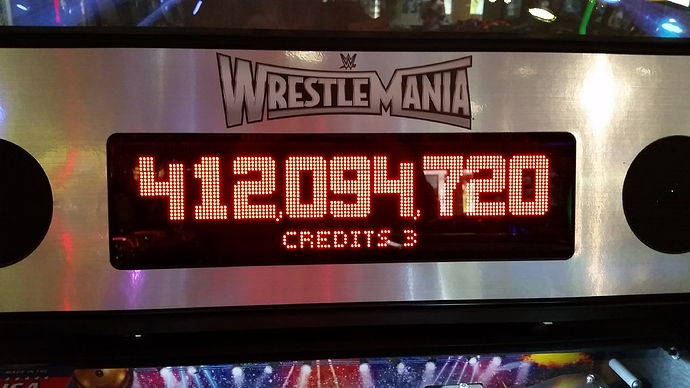 I should mention all of this was on a pro. I’ve never played the LE which is the version Doug has listed for Pinburgh.

And you might say “Those were last years groups”. Can’t be since GB and GOT were not out last year.

Huh. I thought PAPA didn’t have a GB.

A lot of good games hanging out in the back-up section.

what does the seeding mean?

As of right now, the players link shows the list from last year around this time.