Finally just closed the case on something that has taken me months to figure out. This might be obvious to some people, but I’ve talked to several well versed pinheads with large collections, and none of them were aware.

Many people call the thing that connects the plunger linkage at one end and tightens around the shaft of the flipper bat a pawl. The Stern one is generally silver and has sharp corners, while the one of the left is gold and has rounded corners. (@sk8ball says these are Data East). 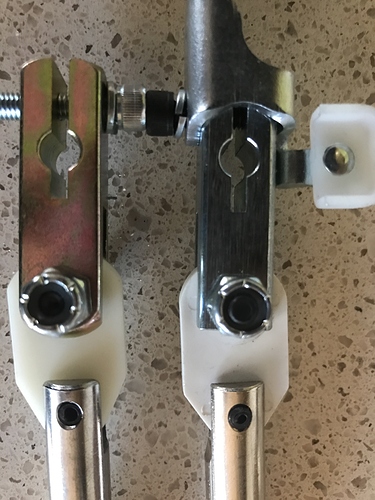 Whenever I’ve seen people ask for help on why the flippers are too steep, the advice is always about making sure you have the correct parts: plunger, linkage, coil stop, and alignment. I’d never seen anyone mention the pawl. To my casual eye, the two types looked similar enough that they should be interchangeable. But they’re not.

The distance between the linkage attachment and where the flipper bat shaft is secured is actually 1/32 of an inch shorter on the Stern pawl. This shortens how far the flipper travels when flipped. If you put other pawls into a Stern machine, your flippers end up too steep…and it changes the feel of all the shots (making some more difficult and/or less powerful).

Just because you order a kit from a parts supplier does not mean you’re getting the correct pawls. Myself and at least one other person I know have received the wrong pawls in Stern flipper rebuild kits on multiple occasions, going back at least several months.

If you, your friends, or operators have flippers on Stern games that seem to steep, this could be the reason. It’s easy to tell which kind they are with the naked eye. Stern is silver with sharp pointed corners. The others are gold with rounded corners.

Edit: Was referring to gold as Bally/Williams, but apparently they are Data East.

Those are Data East on the left not Bally. Bally used EOS switches, DE did not which is why there is no switch actuator attached.

Sorry, the thing on the left came with a switch actuator, I just left it off in the photo.

I guess you’re right, it’s not Bally/Williams. Did not know it was a Data East. Whatever it is, it was being incorrectly used in Stern flipper rebuild kits from at least one vendor.

Best way to remember is pre Goldeneye games use the gold pawls/ stops. The stops use bigger screws so they won’t quite fit right either.

Bumping this thread cause I had one of these in my Stern Spider-Man I just bought.

What era of stern does this actually belong to?

I’ll also add that Marco is currently sending those gold pawls in Stern rebuild kits and they’re IMPOSSIBLE to tighten (with EOS actuator) around the bat.

Oh, and thanks @ryanwanger. This really helped me clear things up.

Can’t say exactly what era but that’s definely old style. Spidey should have the actuator that’s not part of the crank, like this:

Spidey’s got beat on location because it was a fun game and it generally has long ball times. Not unusual to find one with one or both actuators broken off completely. Probably what happened on your game and somebody fixed it with old parts. Best to use Pinball Liife for rebuild kits. Marco has some issues with their listings.

I’ll definitely second the Pinball Life over Marco for flipper parts. Especially lately I’ve been getting a lot of incorrect parts from Marco.