Hello everyone, new to Tilt.

I’ve received my Ghostbusters Premium recently, and have noticed that about 40% of the time, the shot up the Ecto Goggles lane doesn’t trigger the switch behind Stay-Putt.

I’ve examined the switch and tested it with the glass off and under the playfield. The switch is responsive, and seems to be spaced correctly.

I’m baffled as to why this happens so much, unless there is a bug in the code. Throwing the question out in hopes of getting some advice.

well how are you determining the switch isn’t being registered? Know that in game play, to qualify certain shots the right orbit arrow needs to go all the way up past the rollovers.

Common issue and I believe it is from the Ball skimming/jumping over the switch. If you notice it only happens on very strong shots to the right orbit. What I would try is to seat the switch so that the rollover arm above the playfield sits higher.

I’ve never tried to do this on a spike game so unsure if it’s possible or not.

By manually pressing the switch down during the game running. Affected shots are registered when manually pressed. Also, the randomness of it. Sometimes they work in normal play and sometimes they don’t, for the same lit shot in a scene.

I would say it seems to be the strong shots. This would seem to explain some of the randomness of the problem.

When looking at the switch under the playfield, nothing jumped out at me as a way to adjust it so that the switch sits higher.

Just gotta bend it a lil bit. The angle difference won’t be major but the feedback will.

Maybe messing with the pitch of the game will help too.

Others are suggesting bending the wire actuator that the ball pushes down.

Before you do, try rolling a ball over the switch while in switch test. Read the manual to find out how to go into diags if needed (diags buttons are inside coin door). See if you can roll a ball by the switch without it triggering. Roll it against both lane guides. Also, (power off) follow the wires from the switch to see if there are any connectors along the way, including where it connects to the node board. Reseat any you find while looking for pushed pins.

If needed, you can try loosening the two switch mounting screws to see how much play there is in the mounting. You should be able to get a little or more by holding the switch in one direction or the other, then tighten.

Lastly, you may have to bend the actuator, as mentioned above. Before you do though, you need to do a little more troubleshooting. If you’re not sure which way the actuator needs to be bent, don’t do it. Switch test should get you pointed in the right direction.

Thanks, everyone. I have some things to try now.

As previously stated ALWAYS test switches with a ball, not your finger. It makes a huge difference.
If it’s registering with your finger but not the ball - the most likely solution is the arm needs bending slightly

Used the switch test, and was able to confirm the problem away from the game code.

Leveled the game better, and that has helped with ball control, but the switch still has the same issue.

Examined it closely again, and can see no obvious spacing issues that would need to be adjusted. Seems to be tight.

Used the switch test, and was able to confirm the problem away from the game code.

While in test mode, I made the shot repeatedly from the left flipper. It didn’t trigger the switch 30%-40% of the time.

You probably need to adjust the wire armature to stick up a bit further above the playfield. This takes some trial an error. Here’s a diagram that should help. 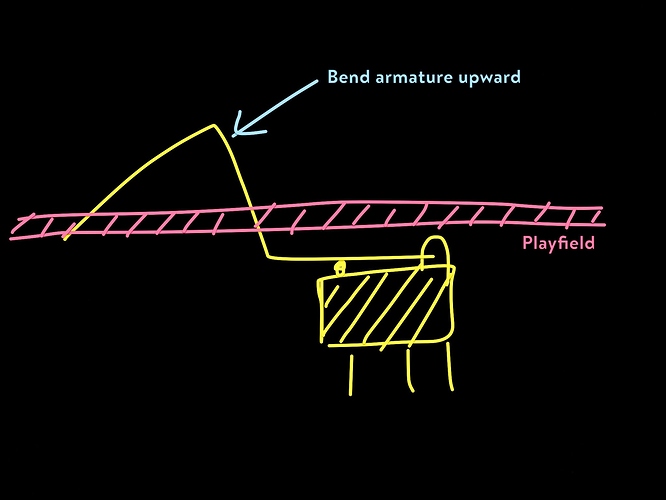 Rather than using the flipper, just roll the ball over the switch slowly while in switch test. Check to see how far the actuator (wire) needs to go down before the switch triggers. Then compare that switch to one of the rollover switches in the in or out lanes (that is working properly). You likely need to adjust the actuator, but you need to see the problem first. Compare how that switch works compared to a properly working switch and you should see a difference.

Do you have any experienced friends nearby? This is pretty simple stuff to someone who’s worked on a few games.

Thank you. Any advice on bending it with it being in such a tight spot behind Stay-Putt? I don’t think I could get two hands down in there.

Hard to “see” the problem, because it’s buried behind the Stay-Putt figure. I understand what you mean, but it’s not something out in the open like an in-lane switch. Just eyeballing it, it seems to be the same height as the others.

You want it to be higher than the others so that it’s more sensitive to stronger fast shots. May have to take some stuff off the playfield to get to the armature to bend it further out into the playfield.

I’d probably go underneath the playfield if it requires removing parts from above. From underneath it’s probably just two 1/4" hex head screws to pop it out. once out, adjust it slightly, reinstall, test, rinse and repeat as necessary. Be sure to remove the balls if you decide to do it this way.

i have the exact same issue on my GB Pro – often times i will hit the right orbit, either to make the skill shot or a shot in a mode, and the ball will end up in the pops without triggering the skill shot or mode shot. very frustrating. i will try bending that switch wire and see if it helps. it’s definitely intermittent - it seems to register as expected about 80% of the time.