This happen (to me thankfully) in league last night.

4 player game. Player one had 120m on ball one, which he was quite happy with. I’m player 2, and get into Powerball multiball almost immediately. My right ramp shots were spot on so I was getting into the upper playfield a ton, and finally hit the jackpot, relit the right ramp, and shot it up there again. The diverter doesn’t open and the ball is stuck there. I shoot another ball up there. Same thing.

Game goes through ball search and the diverter doesn’t tip over…so I know it’s probably something like a wire coming loose from the diverter coil. I have 100m in bonus and about 50m otherwise, and both balls are on the diverter ramp. I know that opening the game and taking the balls off the diverter ramp isn’t going to solve anything, because for the rest of the game, any ball shot up the right ramp will stay there.

What’s the correct way to resolve this?

A major game feature has broken and won’t be repaired immediately. Catastrophic malfunction, start game over on a different machine. P1’s score is not relevant to the decision.

That’s less sexy than I was hoping.

I ended up draining the balls and writing down our scores (because I wanted the 150m). Opened up the machine for 5 minutes and re-soldered the wire to the diverter coil. Then started up a four player game starting with P3. P1 and P2 didn’t get to play ball 3, and added in their previous scores from before the malfunction.

(A consideration on my part is that my league format requires everyone to play the same machines. We were the last group to play TZ, and switching to a different machine would have been a headache for scoring.)

Ok. I was assuming the game couldn’t be fixed on the spot. In that case, it’s a major malfunction for P2. P2 should have gotten to play their last ball, since they lost ball 1 on the malfunction.

P1’s score is not relevant to the decision.

Yeah, I guess that’s true. It’s a pretty chill league…I’m really the only person remotely capable of making a ruling (and probably need to study up more on this sort of thing). At the time I thought that if P1 had a bad Ball 1, I would have just turned off the machine, made the fix, and started over with a new game. But it was easier that it happened to me, it’s my league, and in this case, my machine.

Ok. I was assuming the game couldn’t be fixed on the spot. In that case, it’s a major malfunction for P2. P2 should have gotten to play their last ball, since they lost ball 1 on the malfunction.

Oh interesting. I considered this.

How would that play out given that I had such a huge bonus (and knew it)? Would it be okay to drain and take the bonus, and still play 3 more balls?

Edit: the only thing that seems odd about that is that I earn a free tilt, in some sense, because in the restart, I don’t have to worry about tilting away 100m powerfield bonus.

Any time there’s a game malfunction, it sucks for someone. Depending on the situation and the rules of the event, perhaps it sucks for the person who was playing at the time of the malfunction… or perhaps, as you suggest, it actually sucks for everyone else in the group, because the person who experienced the malfunction kind of gets a bonus ball, and/or because those later players had some huge held bonus that is lost on the restart. But either way, by definition a malfunction means that something went wrong, and that’s never a good thing.

What league format are you using? Does it have explicit, objective rules for how to handle malfunctions (as well as things like playing out of turn, tilt throughs, etc)? Because ideally, your event (whether it’s a league or a tournament) should have those things defined as objectively as possible before competitive play starts. If a ruling needs to be made, a league official should be able to refer to the rules and simply do what they say. Of course, weird stuff pops up from time to time that’s not explicitly covered by the rules, in which case the league official should use their best judgment to make a ruling in accordance with the spirit of the existing rules… but this should be an uncommon situation.

This happened to me and like Bowen said it was ruled a major malfunction and we moved to another game. Unfortunately for me, that game had a built in malfunction. “This game leans intentionally to the right to avoid SDTM drains.” A sign you never want to read before an elimination match…

what is this i don’t even 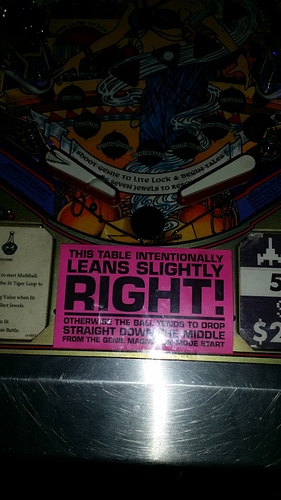 Officially, that would be deemed a major operator malfunction.

LOL. Well it was a great idea in theory. The only problem is it worked out fine for my opponent but, still drained SDTM for me.

I’m curious to know all the different fixes that were attempted before they gave up and said: “It would be easier to just keep it un-level and make a custom sign explaining the situation”.

It’s Ground Kontrol’s TOTAN. I thought it was supposed to pulse the magnet to avoid this sort of thing but, I dunno.

If there is a divot in the center of the magnet, it might not be able to pulse it…because the ball doesn’t start to roll away when the magnet lets go and pulses back on.