Update Aug 31, 2020 - I’ve started a list of major shows or events (Circuit caliber) which have specified their planned dates for 2021. It’s immediately below. I’m continuing to update the cancellation list as needed.

3/16
As most of you know, IFPA just shut down sanctioned events for now. Please continue to post cancellations here IF they are for Large Events a month or more out to help players plan beyond the known suspension. Thanks.

3/11
Just got an email from John that Banning’s Arcade Expo, scheduled for March 20-22, has been postponed, future date tbd. Let’s use this thread to keep a running list of other such changes.

Will events change the rules to let people get full refunds + fees?
At the very least Do something for people hit by the travel ban?

Ugh what a shame. Hoping most events that make/are forced to make such a decision are able to postpone rather than cancel their events

Not that it impacts anyone on here but I just made the decision to postpone the last two weeks of my local league season. Community spread over the last couple days has made it feel like the right move. I expect we’ll be seeing a lot of these in the near future.

Arcade Expo said nothing about refunds, but did say “Ticket and pass-holders will have the option to take a rain check or credit for any other event at the Museum of Pinball in the future.”

In other words… make your INDISC 2021 plans now.

Pinball events are very multi-person hand-surface-contact activities. Organizers will have to make their own judgment calls, just as players will have to decide on whether or not to attend.

Here’s what I posted to our league group this morning. If anyone has to make a similar announcement and doesn’t want to deal with writing from scratch you can feel free to copy, paste, edit this to suit your needs.

In light of recent developments with the local spread of the COVID-19 virus, we have decided to postpone the remainder of the CPL season. I’m sure everyone has heard enough about the news that I don’t need to dig into the details, but I just want to stress that this is a postponement, not a cancellation. Pinball league is fun, but I don’t want it to feel like an obligation for any of our players or officials who would prefer to be cautious and avoid close social contact at this time. We will continue to monitor the situation and make an announcement regarding the rescheduling of the last two weeks of the season and playoffs date when it feels appropriate to do so. Be safe out there and thank you for understanding.

Just received this via Stern: 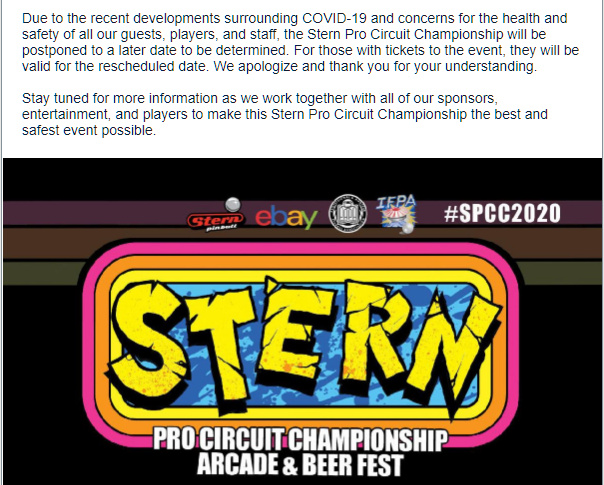 Are the powers that be going to show any leeway to any regular circuit events that might be cancelled this year? As far as eligibility

Are the powers that be going to show any leeway to any regular circuit events that might be cancelled this year? As far as eligibility

No penalties for SPC events cancelling with respect to eligibility next season.

I would ask that those leagues email us to update their submission to the corrected dates. The 60 day submission deadline would then apply to the actual date the league season really ended.

Maybe it’s to far out but what is something gets moved past end of year will count for this years state or next years state.

Don’t want people to try to game it.
Can happen with an league that was to start about now end in NOV / DEC but get’s pushed back and ends in next year

Look at other pro sports (it may be time to start thinking about the need to unlink things like SCS, stern pro, etc to and HARD date line)

Maybe it’s to far out but what is something gets moved past end of year will count for this years state or next years state.

what about an multi month league that get’s pushed back an month or two? and ends up ending in next year vs end of this year as planed?

what about an multi month league that get’s pushed back an month or two? and ends up ending in next year vs end of this year as planed?

Our entire system is based on the END DATE of every event. That date dictates what year the event counts in.

We have a couple of tournaments coming up, one on 3/21. Here is the message I sent out to everyone.

As COVID-19 continues to spread in the U.S., we wanted to take a moment to update everyone on our stance regarding the tournament slated to be held on 3/21. It is always a top priority of the First State Flippers crew to provide a fun, yet safe environment for pinball players to enjoy. We are taking the COVID-19 threats seriously and we are closely monitoring all announcements and alerts from the CDC, the WHO, and our local State Reps. As of now, we still plan on having the tournament at Mike Veith’s house on 3/21. With that said, we are taking extra efforts to continue to provide everyone a fun AND safe environment. We will be providing additional hand sanitizers, additional soap, additional paper towels, additional tissues, as well as disposable gloves for everyone to use at their convenience if they feel so inclined. We will encourage everyone to wash their hands more frequently and use sanitizer more frequently. We also ask everyone that if you are feeling even slightly ill, that you take a pass on this tournament and your deposit will be refunded 100%. As we continue to monitor daily activities regarding COVID-19, should anything change our stance on cancelling the tournament, we will immediately let everyone know. If anyone has wishes to withdraw from the event now, please let Chad know directly and he will issue your refund.

At the end of the day I think we have to try and maintain some level of normalcy, and First State Flippers believes we can deliver a fun AND safe event for those who still want to get out and play some silver ball!

Sorry to announce that TPF is cancelled. https://texaspinball.com/tpf/texas-pinball-festival-is-cancelled-for-march-27-29-2020/

Fellowship of the Silverball in SC for March canceled.