@keefer is it possible to turn off plunder in tournament mode?

You can turn it off in settings (snowflake), which should be trivial to do if you’re setting up competition mode.

Love the concept of using a flipper code for a game setting when keys aren’t available!

BTW, if you do it right, you’ll see a message…

So my buddy just played Liars Dice after he played the wizard mode with tentacles attacking the ship. He wagered 'Your Sou’l ( not Souls). He lost the game of Dice. The game blanked out and went quiet. They put in a credit which brought him back to the main game display but still no sounds no flippers no ball.

Guess I’m going to have to double check this, sounds like a bug. What’s supposed to happen is you lose your ball like you normally do, but also your character (have to pick a new one). If you win, you get an extra ball.

Is it possible to try unreleased 1.0 code on my POTC CE? Is there eta for official release?
The game is amazing - true masterpiece!

We can safely assume unreleased code has been played on developer machines so we know it can be installed on those.

We don’t know if you have the code or if there are checks restricting any leaked copies to a specific machine.

I’ll try to be more specific: @keefer - does JJP consider an open beta format for unreleased code update? As a software dev I’d be interested to give it a go and run some bleeding edge software on my POTC.

I play this game pretty often and wanted to offer some helpful playing tips to this game to the thread and potentially the rulesheet. I recommend people new to the game play barbossa on individual playthroughs, it helps to see where the multiball shots start and to learn how to stack each multiball and use them as add a balls, while collecting supers in the process.

for the more experienced players, henry turner offer a bit more value in his traits. With henry turner, you can go through the process of starting/stacking multiballs but more importantly, start chapters, and easily collect characters and progress through the chapters. In one playthrough, I collected 34 characters with Henry Turner and in the process, collected shot, bonus and super x and ended that game to the tune of 1.5m, 3 supers and big bonuses. The long term value of henry turner is that you can move faster to the wizard modes by virtue of the character collects on target.

other than that, I think that each consecutive blue inner loop followed by gold target collect multiplies the amount of gold you collect. I have hit the loop 4-5 times then the gold, and collected 20-30 gold in a few taps of the center button.

I think that each consecutive blue inner loop followed by gold target collect multiplies the amount of gold you collect. I have hit the loop 4-5 times then the gold, and collected 20-30 gold in a few taps of the center button.

That was probably when the gold targets were completed which gives a lot more when cashed in.

I played a game today and managed to loop like 12 times or so. This spawned many large chests with gold. Collected it all for total 590 gold pieces!

so the gold collect is exponential? Wish we had a dev to tell us the formula

Wanted to thank Keefer for the plunder off flipper code. It has been a lifesaver for our league.

In each Chapter, the goal is to complete all flashing shots, from a minimum of 1 to a maximum of 8. Completing a Chapter awards a Completion Bonus of 2500 and increases by 250 each time, a Timer Bonus worth 25 x the number of characters x the number of seconds left, and adds a .5x multiplier to all characters and other scoring during the next played Chapter. The shots themselves are worth the Skull value corresponding to the appropriate color. The more characters collected, the higher the level of scoring in a movie’s Wizard Mode will be. Completing Chapters also contributes to this tally.

There is a chapter with 12!!! Got it today. Just FYI. Biggest one I’ve seen, but it does exist. Had I known the rules said 8 would have taken note of the name. Please correct rules…

Replying to my own post because I bought a JJP POTC standard edition this week and I’m loving it!

Congrats! I’ve been watching @kdeangelo blow this game up on live streams–looks fun and I hope to play it more and learn the rules someday.

Uploaded one of my favorite pinball photos onto the game. What a cool feature! 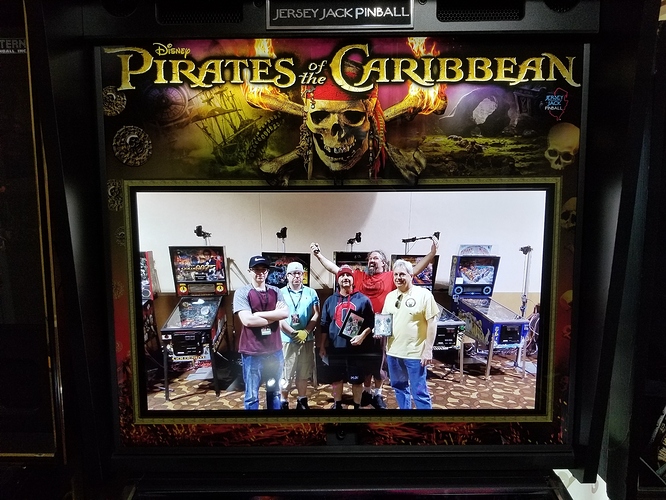