Can they set up a couple more banks and make an E division?

We are setting up more banks, that’s how the capacity increased from 700 to 740. With 160 players making finals it seems like four is the right number of divisions – we’ll try it and see what happens.

See you at PAPA!

There are always last minute cancellations, it happens with events this large. I attend many ‘sold out’ hockey games every year and I can look around a pick out many empty seats.

Pinburgh morning open spots are first come, first served. If you are there and a spot is open, you’re in.

Second this- I went last year, even though I’ve only been playing pinball for a couple of years. I think I came in 600th or something like that? Had a total blast. It’s just fun playing that much competitive pinball, and like Ryan said, you’re mostly playing with people who are having a similar arc through the tournament as you- so both victory and defeat seem like they are always within reach.

I want to point out this isn’t a guaranteed occurrence, though. Ask the Street’s about the last time the cap was at 400 and they drove up from Alabama and missed coming off the wait list by one or two spots.

There’s a reason we moved the whole shebang to a larger arena and keep increasing the number of people who can play. 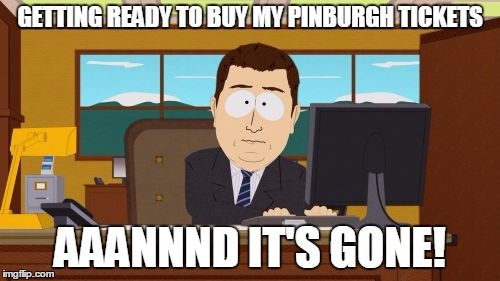 How many minutes did it take?

26 minutes is the word on the street.

Have you considered doing some pre-registration and then running a lottery for the tickets? As is, the system is not particularly equitable, especially for people with a slow internet connection, or for people who are forced to travel or work at the time registration opens.

Absolutely not. 26 minutes is plenty of time for any type of Internet connection.

People who have to work or travel have another means to register: other people. I know at least 2 people who did this and there are surely many more.

I live way out in the stix and my internet is basically one step up from dial up and I didn’t have any issues.

Like anything, you are never going to make 100% of the people happy 100% of the time. PAPA Staff does the best they can and the idea of holding a lottery seems way more cumbersome then simply opening the flood gates so to speak.

Realistically if they tried something like that then they would just get complaints that too many tickets are going to the lottery and not enough for tickets for sale.

End of the day everyone has the same opportunity and realistically they go through allot of the wait list each year so if you are on that chances are you are going to get an opportunity to attend.

Yes, I realise that no system is perfect. I wasn’t worried about me not getting in since I’m not planning to attend this year anyway. It was asking simply out of interest

Makes me think the 26 minute mark was the first point at which all tickets were ‘in-cart’, but not yet purchased.

I thought I saw a 15 minute timer on my cart when I bought my tix tho.

You can sign up for the waiting list. From what I was told about last year’s event, 70 people canceled before the tournament and there were even some spots open for walkups.

This is correct. There was a complete sellout in under an hour, but after 26 minutes we had to wait for tickets to expire out of carts. Which happens when people refresh the page and try to add a ticket to their cart to see if it is sold out yet.

Jerks? Sound more like simple-minded technology to me. People do what they do because they can, so we shouldn’t be surprised when they do.

It’s not necessary to reserve tickets when they are added to the cart. Instead, reserve them just before the payment is acknowledged. If the tickets are not available at that time, let the user know, and abort the payment. That changes the process from “first to put in cart” to “first to pay”.

Yes, it does mean that I can add something to my cart that may no longer be available by the time I get to the cash register. But the alternative, as you point out, is worse. When people are allowed to sit on items in their cart with no intention of actually buying them, the picture gets distorted a lot more than it would otherwise. And “first to pay” allows a much more accurate picture of how many tickets are actually available (instead of hypothetically available).

I disagree that it’s “simple-minded.” They use a third-party ticketing platform that services many events. The in-cart reservation makes for a good user experience. What you are describing would be absolute chaos for events with reserved seating, and multiple purchase options.

I think the best solution, if it’s an option with the third-party platform, is to reduce the hold time. 15 minutes is a long time. I think ticketmaster is like 3 minutes. That’s more than enough time to type in payment details.

It’s not necessary to reserve tickets when they are added to the cart. Instead, reserve them just before the payment is acknowledged. If the tickets are not available at that time, let the user know, and abort the payment. That changes the process from “first to put in cart” to “first to pay”.

This would be deadly, as dozens of people would be in line to purchase then would be told it was gone, pulled from them. Large ticketing agencies, including Showclix (the one ReplayFX uses), Ticketmaster, and others, reserve a ticket then give the user a reasonable amount of time to complete the forms; if they don’t complete in time, the reserved ticket is released.

I am confident that if we used a “first to pay” system we would have heard a large number of complaints from people who tried to reserve and were not allowed to because of the speed of their connection and their ability to complete forms quickly. Instead, the only complaints are about the measure of how quickly the event officially sold out – seems like a good deal.

Totally agree. In the early days of online ticket purchasing it used to work “first to pay” and it was a trainwreck. Essentially, “unmitigated dumpster fire”.