I plan to use this site to showcase the various competitive pinball analytics-focused projects I have done over the past few years in my free time. These include the Pinburgh Fantasy Leauge (soon to be YEGPIN fantasy league), live Win Probability, and a new project I’ve created called the Pinball Statistics Power Rankings, which I plan to update weekly.

Currently, I just have 2 blog posts up about the Pinball Statistics Power Rankings – a metric I accidentally created when I was putting together my fantasy IFPA picks. My web development and creative writing skills are lacking, so I am hoping that putting this website out there will motivate me to productize some of my stuff that currently lives in spreadsheets.

I enjoyed the write up on all the individual players. Will be following for more updates.

Site is rendering a little wonky for me though

Thanks, I’m using squarespace and there are some hidden properties to things like text boxes that I don’t quite understand.

Killer brother. I’m a huge fan of data and enjoy seeing the numbers behind everything. I’ll be following!

I find this very interesting. Thanks Tim! Too bad I totally destroyed my rating at D82 back in April. I’m guessing it will take a long long time to undo that damage.

Hi Chris,
Since I’m using the rating lower bound playing more can still cause improvement here since time will cause a player’s lower bound to drop. Additionally, I think there will be a big shock when the Pinburgh 2019 results drop off. Those results for players who were in B division have a big impact on Eff Percentage and Power100 Win percentage

Another thing I was discussing with a pal yesterday. 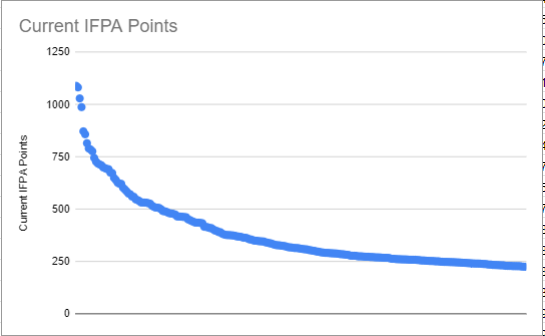 The distribution of WPPR points is still very lopsided since the IFPA restart last August. Obviously there’s still the global pandemic to contend with. It’s interesting that there are 3 players with over 1000 WPPR points now, but I think there’s still a lot of catching up that needs to be done.

Cool project! I’ve also thought about combining the available metrics into a hybrid, but never got around to it. Would be interested to hear what you did if you ever feel like sharing. Are you doing any kind of validation, or just smell testing it?

I’ve toyed with a hybrid, too. I generally agree with the pros and cons you mention for each component, especially the Glicko-related issues and the match play 4-player item where one good game = 3 wins and one bad one 3 losses. One additional difficulty with efficiency, besides how the WPPR point curve works by field size, is it fails to adjust for field strength either.

One other other thing I’d consider here is that the component rankings are nonlinear. Player X may be one position ahead of Player Y in component A and one position behind in component B, but the gap between positions could be large in one and small in the other. Given equal component weights, they’d tie, yet the one owning the larger spread could be considered the better of the two. In addition, a spread of 40 positions may mean more in one component than another, e.g. the skill gap between #10 and #50 is not the same as between #50 and #90.

Great start, though, let me know if I can help you with it.

Would be awesome if you (or someone else) could also make an analysis of any trends or patterns in playing styles/techniques/tactics that the top players seem to use.

I’m not using the rankings, just the value of the statistics.

Don’t go through the details! I love the mystery of TIM HAS SPOKEN!

Worst thing we ever did was sharing our formulas

That means there’s only one way to do this. Bob and I need to host a tv show on ESPN where we argue about this for an hour each week.

What about “C” division? Asking for a friend…

Last few minutes of each show is Tim and I doing a heads-up challenge on a different game each week. FunWithBonus can do the commentary.

For a small fee, we’ll agree not to dissect the current WPPR distribution curve. Today is exciting because it is the first time I am able to show off the 1-week power ranking change column along with the updated power rankings. I designed the rankings in a way that should give them some movement each week. So far, the...

YEGPIN Fantasy Pinball is up

See if someone is willing to take a pay cut

I had this image of Timmy being David Pourtnoy in his One Bite pizza judging.

Tim watches someone play, contemplates, and then simply says “7.8”. Everyone just accepts that 7.8 as fact.