Now that things have opened back up, I’m running an informal Tuesday night at Logan Arcade again. It’s been tough finding inspiration for new tournament formats, but I think yesterday’s Pinball Bingo was pretty successful. We brainstormed 28 goals, and used an online bingo site to generate randomized cards.

House rules are: don’t be a jerk, don’t kick the machines, only one extra ball - gotta plunge the rest. Players were split into groups of 3 or 4, and assigned an initial machine. Lowest score picks next machine. One group started late so I noted their time in case they bingoed - I think it would be equally OK to not level the playing field for late players. It’s probably Best Practices to keep the groups the same size (3 or 4) but the numbers didn’t work out.

Anyway, people really liked it! Got more positive feedback on this than I can remember for any other new format. Now to come up with more goals… I feel like keeping machine-specific goals to no more than 1/3 of the pool is probably good, but it’s harder to come up with machine-agnostic ones. 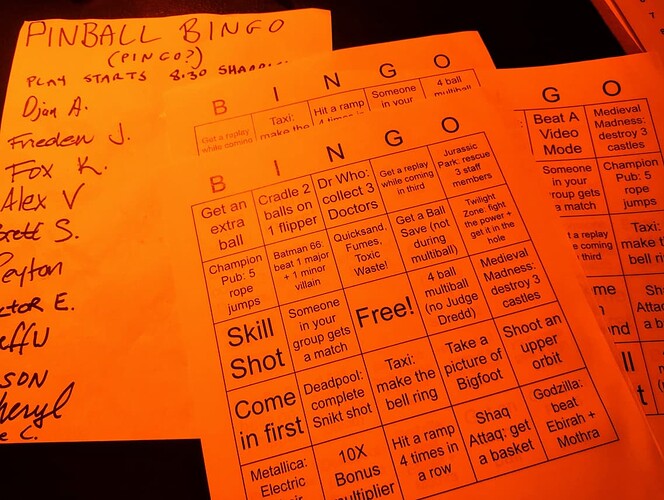 even with that are some things on X game you can’t do that. or others on some games it’s way to easy to get an skill shot.

It’s lots of fun. Works very well in pairs play, where while you play, your partner records your successful achievements and suggests what to do next to complete a line.