Pin Recommendation - Best of All Worlds

So I currently have two pins in my collection; a Blackout and a Skateball. I also have a wife who does not particularly enjoy either game and I can’t really blame her. In fact, neither game is really that exciting/accessible to non-pinheads. I’d like to either get a third game, or more likely, replace Blackout with something that my wife and my non-pinball friends/guests might enjoy a bit more but I’d like to also not break the bank. So what are your nominations for pins that have the best overall combo score in the following three categories:

*I think the highest value in this category is a game that has a challenge that I enjoy attempting to accomplish over and over and over and over again. Something that will not become boring in the middle of a particularly good/long game. My first thought is Bram Stoker’s Dracula. I will never get bored of trying to stack those 3 MBs together. Counterpoint would be WCS. While I do love that game, you can play through the objectives several times in one good game and honestly it just loses its luster once you’ve defeated Germany and/or played the World Cup Final 2 or 3 times.

**It’s gotta have RAMPS and MULTIBALLS!!! DMD is a bonus but not a requirement. Oh, it should probably also not be TOO boobsy and/or not family friendly.

Question on BSD: Is it too difficult/inaccessible for beginners to be fun for anyone but me?

My wife would not enjoy BSD, from your description I’m not sure your wife would either. If it were me, I’d probably go a little above $3000 and look for a Shadow. That game can be incredibly difficult but even beginners can have fun because multiball and the battlefield are pretty accessible. Plus you get to chase loop combos all day!

Other games I can think of in your budget that are tough but accessible:

Question on BSD: Is it too difficult/inaccessible for beginners to be fun for anyone but me?

I think yes. The low scoring unless you do specific actions and lack of features that can be started by beginners can make it tough for casual players to enjoy.

Time to take the wife down to Bare Bones to give it a play test? Yep. 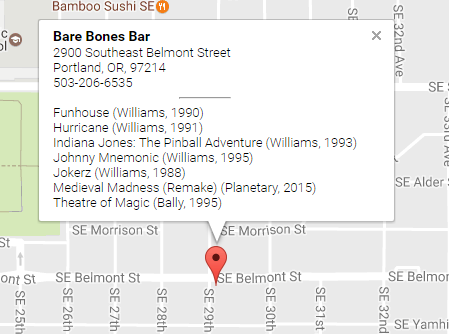 Ripley’s or Shadow. In that order.

Dr. Who, Whirlwind, The Getaway, Demolition Man, Dirty Harry, No Good Gofers, Road Show, Batman Forever, and Rollergames are all worth checking out in that budget/needs range. Lots of gameplay variation in those listed there, but one of those would probably fit into what you’re looking for, I’d think.

I’d put most of those in the “would get boring quickly” category. For example, I’ve owned a NGG and RG in the past and both were pretty lame after a minute*. I have kind of wanted a Demo Man for a long while, but the aesthetic is not my favorite. Haven’t played much Batman Forever… but not super attracted to those oddball Sega games of that era. Getaway might be worth thinking about though. That’s a pretty fun game and that super charger is super cool and crowd pleasing. Good suggestion.

*NGG really did get boring fast. Just not much to do in that one. Rollergames… THAT SONG!!! But fun game

Some games my wife likes in your price range would include fish tales, road show, junkyard, diner, and bad cats (although bad cats doesn’t have multi-ball). If you could let her try these maybe you would find one she likes.

BUT I WANT ONE

+1 for @Barry10’s suggestions of Fish Tales and Junkyard, although the con to either of those is that Dast and I will be at your house constantly.

I’ll go a bit off the beaten path here:

I agree with @CFFLegs that BSD isn’t a great game for casual players. Its redeeming quality is that it lights Mist Multiball on ball 3 if you haven’t already lit it, and phase 1 of Mist Multiball is certainly a crowd pleaser. But you can have many games in a row without making anything interesting happen, and that’s not too fun for casual players. Combined with the very long/steep/difficult left ramp, IMHO BSD is just harsh.

Junk Yard isn’t that easy for casual players, I’d say. Fast and furious… Fish Tales would be a better choice I think (although the missed shots to the boat with their instant center drains could be a downer).

I’m still enjoying Pirates of the Caribbean. Gauntlet is hard enough to reach that I’m still interested after many games, but there is a lot going on for less-skilled players too. Not sure whether that won’t be outside your price range though.

Another one that’s nice for casual players is South Park (but experienced players usually hate it).

Getaway also strikes me as a good suggestion. Not too hard to have fun as a beginner, but challenging for experienced players after many games. Rule set is a bit shallow though.

I think WCS is the game that fits your wants the best.

I’ll pitch a bit of a strange one… Data East’s Jurassic Park (caveat: put in the ChadH code; I’ll explain that in a bit).

Basically an Addams Family rip-off, but easy to find sub-$3k. It’s got several multiball modes (Tri-Ball, Raptor 2-ball, and Chaos 6-ball). It has one ramp (with a diverter so it can feed back to either the left or right flipper). It has a DMD. It has three flippers and has shots that require using the upper one. Theme is exceedingly family friendly. It has a lot of modes for the era, and you don’t see them in the same order so it mixes things up. Can have short ball times but is not an overly brutal pin.

You definitely want the ChadH code, however. It takes away the “free” Tri-Ball reward on ball 3, removes a bunch of bugs, makes it so you don’t always have to start with Stampede mode, balances the Mr. DNA choices, and balances out the scoring on the modes.

When I have guests over, Jurassic Park is a big draw. It is easily the biggest draw for those that do not regularly play pinball. Kids like the T-Rex eating the ball and the captive ball to “hatch” baby dinosaurs. Better players appreciate that you have to hit scoops to advance modes and ball control skills are needed to last very long. It has a lot of shots. And, thanks to ChadH code, rather than being a casual mess in software you have a balanced game that isn’t overly easy.

A lot of people got started on Bride of Pinbot. Easy enough to just spam the ramp to get MB. Once you get better you start collecting the ring values, or bumping the lane values or going for the backdoor billion shot through the center ramp shot.

Once it is mastered you can bump it to 2.0 and get a whole new game out of it.

For some reason casual players tend to love BSD at my place. The mist ball is a big reason I think. I don’t understand it because I usually have my BSD setup hard. I have Shadow too and people tend to prefer BSD. Maybe my friends are all masochists?

Does your wife like pinball? If not, don’t buy a pinball machine that she might like. I did that and my wife could still care less about pinball.