Anime is something that rarely, if ever, has references to pinball besides generic machines found in backgrounds. However, there is a new anime that’s debuted this past month, Gamers!, about a group of high schoolers in Japan who engage in competitive gaming. Apparantly, on their wall of trophies at their headquarters at the school, they either won PAPA 16 or stole the trophy: 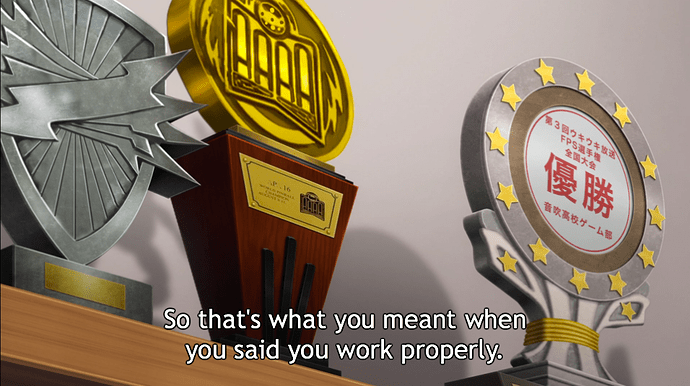 Well, technically, it says “AAAA,” but the logo looks similar enough that anyone here reading this would know what they’re referring to. That, and the right legs on the first and third A’s are pretty obviously added in. The trophy itself is not mentioned by the characters nor is it relevant to the story (at least not so far); it’s just a background detail that just happens to be the focus of one shot but can be seen in the background of many other shots of the room.

If anyone wants to see it, it’s in the very first episode at 15:08. Link to the episode can be found here:
http://www.crunchyroll.com/gamers/episode-1-keita-amano-and-chapters-of-the-chosen-742409
(Subscription required, but a free one will allow you to watch it.)

Nope, still got it. It’s not entirely the PAPA 16 trophy (no Martian) but it is really wild.

I’m wondering if the artists queried “gaming trophies” in Google image search. The PAPA 16 trophy, the Game Stop trophy, and the silver lightning bolts are all first row results. You’ll see each one has been modified for the anime.