Last year, I was upset that I didn’t take a photo of every sheet, this year I did. Now to obsess over the numbers.

Next year need to keep track of lucky breaks vs unlucky breaks (thanks for the tip Eric).

I didn’t really keep track of that, but I have been wondering about my overall performance as of late. I was shocked that I was able to qualify for A division. I ended up finishing T-122.

I was definitely there to compete and didn’t really give much thought about prize money. I played my best. I was shocked to learn how much money was spread among all the divisions. It makes me wonder how many people sandbagged for the money, and if I really did as well as I thought I did. Well for me anyways

OK this post inspired me to try and recollect my wins by machine. I’m dead on in most and pretty close on the rest. Hopefully any actual errors even out. 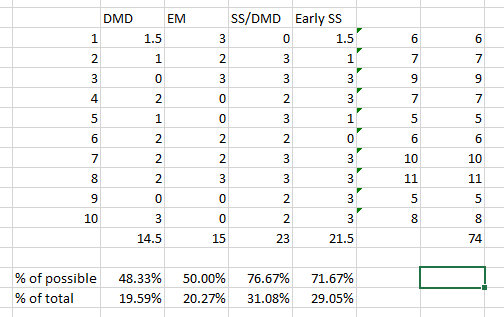 (The last column is just reference from pinburgh.com to make sure I came up with the right totals for each round.)

The interesting thing to me is that I feel my EM scores are way up compared to my average and that DMD was by far my worst. That really surprised me.

I always keep a tally by era as well. 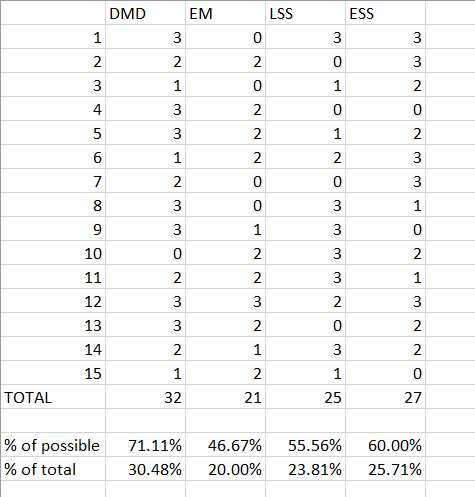 I think last year was similar, but I had only 9 points on DMDs somehow (and a bit higher on ESS and LSS), even though that’s what I play primarily.

Both this year and last year I was glad to focus my practice on EMs - there are a handful that I can play regularly at Lyons Classic Pinball. Almost across the board, my groupmates were significantly less comfortable on the older machines…and couldn’t seem to play them as patiently as they did the newer games.

I got bit really hard by the EM’s, and to a lesser degree by the Early SS. I did by far the best on the Modern DMD games as I expected to. Here were my numbers:

Last year, I was upset that I didn’t take a photo of every sheet, this year I did. Now to obsess over the numbers.

Next year need to keep track of lucky breaks vs unlucky breaks (thanks for the tip Eric).

Lost 1 EM point to tilt through. I claim I lost 2 DMD points to catastrophic malfunction. EMs are still my points. 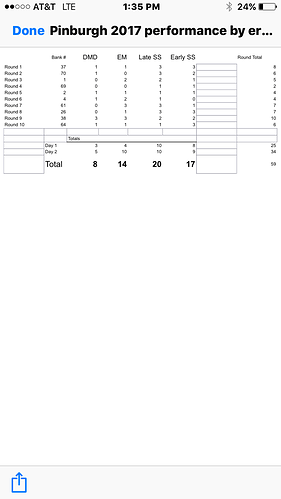 Agree on your DMD sentiment. Man there are so many I don’t know and I played a lot of them.

I didn’t record my results era by era, but if memory serves me right, this year I didn’t get any zeros on the modern game. The third game (early dmd / late solid state) I think I only got one zero… on Corvette of all games…

I haven’t done the deep dive either but I know that most years the EMs are what carry me through a bank and man … this year that was just not the case. So. Many. Zero. Flip. Balls.

Ha I thought I was crazy for doing this. 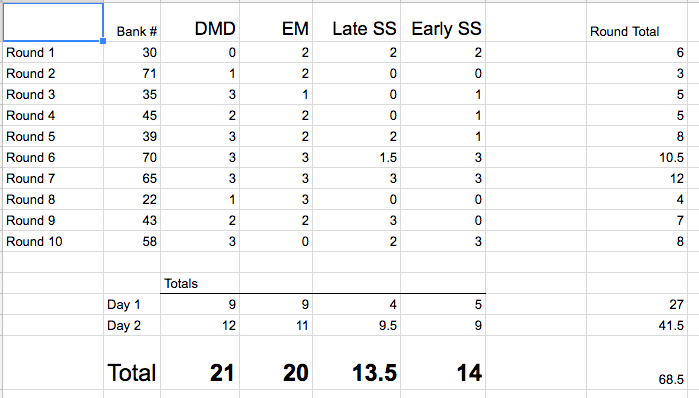 That Corvette was rough. The left orbit hit the top of the sling. No sweet loop passin’ action. 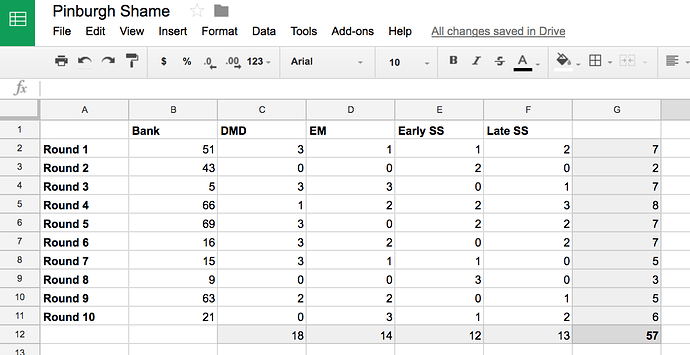 I had 11 three point games, and 12 zeroes. 8 two point games and 9 one pointers. Those zeroes (many on EMs) killed me this year.

Happy with my EM results, won 5 of them. Gotta do better on DMDs.

No zeroes on day two was nice. Helped me to get a double bye in B, which I promptly wasted by losing in the QFs. 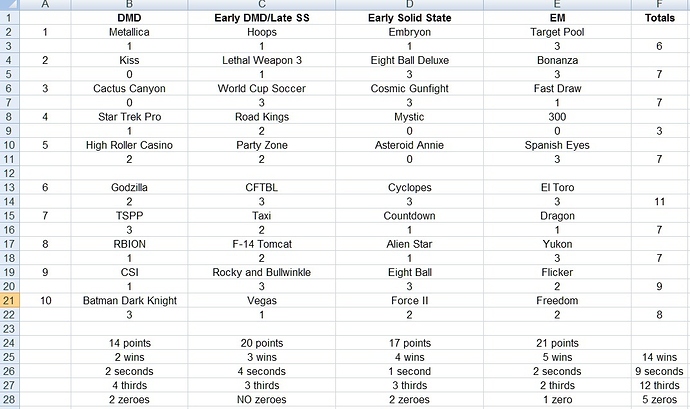 Really need to work on my solid state abilities it seems. Also surprising that I had so few third place finishes. It’s not like I’m playing boom/bust strategies…I’m always conscious of trying to pass the person ahead of me first, and going from there.

Seems like I need to work on the early SS more than anything else, but in general, bring up my play. Also shows how much worse my 2nd day was, mostly due to EM’s, which carried me on day 1, but did not fare anywhere near as well on day 2.