Youth Tournaments and Battle of Pinball Titans Exhibition New in 2020

(New York, NY) - Never Beef Productions announced today that the New York City Pinball Championships returns in 2020, with added attractions and more hot pinball action. Everyone is welcomed - from casual non-tournament players wanting to enjoy pinball machines from all eras, to the top competitive players in the world. The main tournaments take place May 15-17 in the Grand Ballroom at the Skyline Hotel in Hell’s Kitchen, Manhattan.

The event kicks off on May 14 at the Tribeca Pinball VIP Pre-Party and Tournament, featuring the Battle of Pinball Titans exhibition benefiting Project Pinball. New for 2020 are the family and beginner-oriented Project Pinball Youth Tournaments, which will feature three age brackets. Pinball players ages 6-16 and their families will experience big-time tournament pinball while benefiting the Project Pinball charity, which places pinball machines in children’s hospitals.

The Tribeca Pinball VIP Pre-Party and Tournament, a resounding success in its inaugural edition in 2019, returns in 2020 expanded to 64 players. And new for 2020, the VIP Pre-Party will also host the first ever Battle of Pinball Titans exhibition, a star-studded winner-take-all three-game event with a purse of $1,000. Tribeca Pinball founder and owner Adam Schwartz will generously match the purse with a $1,000 donation to the Project Pinball charity. The Battle of Pinball Titans – as well as the VIP match play tournament that follows – will be streamed worldwide with exclusive NYCPC streamer Backhand Pinball.

“We are thrilled to build upon the continued success of NYCPC with more tournaments, a significantly grown partnership with charity Project Pinball, more streaming, and more entertainment in 2020,” said Levi Nayman of Never Beef Productions. “NYCPC is going to be everything you’ve loved in our previous years, and more!”
NYCPC tournaments will include International Flipper Pinball Association (IFPA)-sanctioned Open, Classics, and the Dahlia Rowan Memorial Women’s NYC Championship, as well as a B-Division contest for players ranked outside of the top 500 by the IFPA. Cash payouts will be awarded in all open divisions.

Registration and ticket sales for all tournaments, the VIP Pre-Party, and merchandise opens on Sunday, January 19 at 1pm EST, at Eventbrite. In addition, a limited amount of discounted hotel rooms will be available through the Skyline Hotel. Visit the revamped NYCPC web site at www.nycpinballchamps.com for links, registration, and information.

Players will compete for a wide range of cash and prizes on diverse banks of pinball machines provided by some of the area’s top retailers, operators, distributors, private collectors, and pinball machine manufacturers. Never Beef Productions was founded in 2018 and consists of competitive pinball players Paul Caras, Levi Nayman, Tim Sexton, and Austin Smith to produce NYCPC as well as other pinball-related projects.

Hotel registration link will be emailed out around 2pm to registrants: 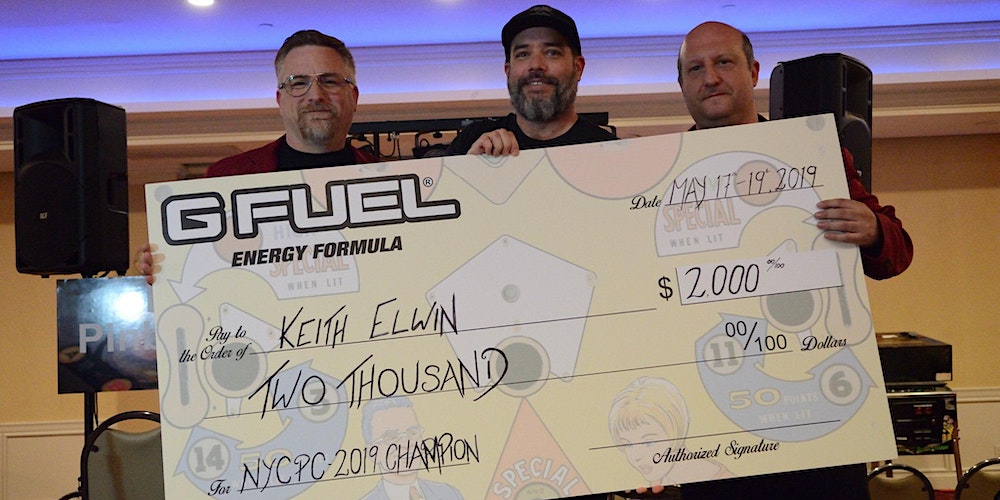 Will the t-shirt/hoodie design be released before Sunday?

As usual we are well behind on the shirt design!

Is there a cap on number of entrants for the main tourney this year?

Yes. Well 240 tickets overall for Main/Classics/Womens. In previous years not everyone has competed in the main division

Lick your SCS wounds or celebrate victory by sending us your money in an hour!!!

There’s always another page to write!

where will the vip pretournament Pre sale be at?

Edit, i found it, there is a little tiny arrow for scrolling down. Doh

In case anybody missed the email with hotel block, you can book here. It’s a small hotel and our allotment will sell out fast:

What’s the cost of tournament entries in all the events?

NYCPC Open will be held on a bank of 14 tournament games. NYCPC Open division entries are $5 each, $15/4 games with the 6 games counting toward a player’s score.

Was that the same price as last year?

We have troubles today we did not have yesterday. We had troubles yesterday that we have not today. And yet, there will be better times ahead.

We appreciate the patience of those who have inquired about the status of NYCPC 2020 while we sorted through logistical issues over the past couple of weeks.

Unfortunately, we do not think it is prudent at this time to continue with our current plans for NYCPC 2020. We are very disappointed with this turn of events, but it does not seem wise for us to proceed during this international health crisis. In the scheme of things we think our tournament is pretty low on the list of priorities we all need to deal with at this time.

It’s frustrating, but nobody knows how this is going to play out. So while we are and will be examining possible postponement dates in the late summer or Fall, realistically, we don’t consider rescheduling at this particular time to be a responsible option.

Full refunds will be issued shortly through eventbrite. It’s a manual process that will take up to a week. Please contact Skyline if you have made hotel reservations that you need to cancel.

Thank you - players, sponsors, and volunteers - for your support and we look forward to playing pinball together again with all of you soon, hopefully in the near future.