Recently picked up a Mousin’ Around and was determined to find an easy way to make it viable for Tournament Directors to use it in their tourneys. Game has a great layout and a fairly challenging multi-ball, but that center ramp shot is just stupidly valuable. For those who don’t know, the shot is blocked by a 3-bank (a la Attack From Mars) and once lowered the ramp will award the following; it will light the other ramps for MILLION letters, it will re-light the kickback, and it will score 100,000 pts. This shot is easily repeatable, so most skilled tournament players would lower that bank and ramp out for millions and extremely boring play.

So here’s what I came up with: I removed the wires from the ramp switch and relocated them to a new switch that I installed under the playfield. 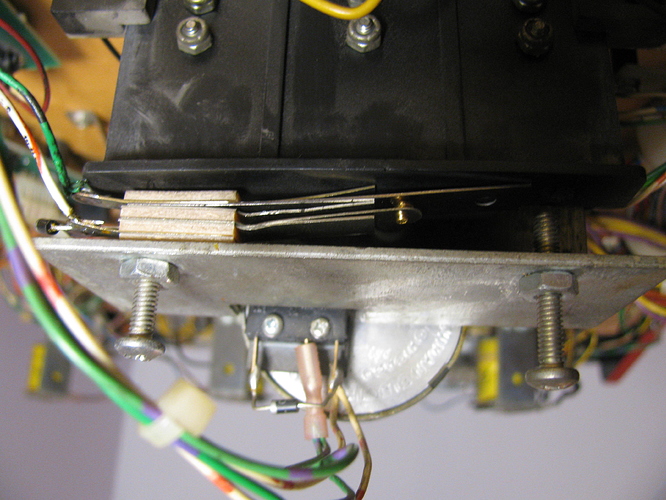 This new switch is activated by the 3-bank being lowered. So now, dropping the wall will award 100,000 pts and light the ramps for MILLION letters. Okay great, so now what to do with that center ramp switch? We still want to give players a reason to shoot it, so I wired it up in parallel to the left inlane switch (White/Blue, Green/Black). 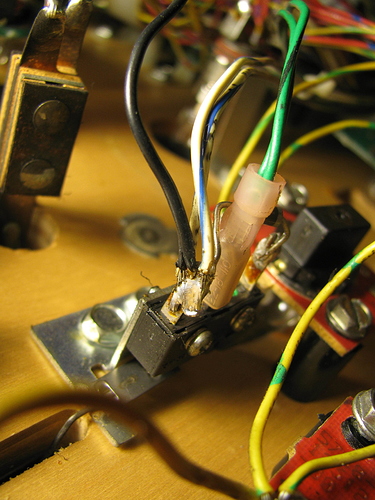 This switch will award MOUSE TRAP letters when the lane is lit. Spelling MOUSE TRAP will allow you to lock balls for multi-ball. Prior to the mod, the only ways to collect letters was from hitting the corresponding stand-ups or by rolling through a lit inlane (ramps both feed after the switch, however the left orbit will feed to the right inlane). At the beginning of game both inlanes will be lit, but after that the lit inlane will alternate and the game will no longer allow you to collect them by shooting the left orbit either. So with the new mod, players are given another strategic option for collecting MOUSE TRAP letters, in fact, after the first multi-ball, players can now combo their way to lighting locks by shooting center ramp/left orbit combos. Pretty cool!

One consideration is that factory setting for the kickback is to start the game with it lit, once used re-lighting came from shooting the center ramp 3 times in a row. Now that the switch has been moved, relighting will only come from lowering the center bank 3 times. On our game we have chosen to set the kickback to easy, this ensures that each ball will start with it lit.

I agree that mousin is a great tournament game, but there is a much simpler solution that was done via PAPA back in Aug 2014.

Just use these rubbers:

Modify them to fit on the two side posts, and you have now closed the gap on the shot to the point that you can still make it, but repeating it ad nausaum is extremely difficulty.

Knocking down that 3-bank 3 times for kickback, basically means you get one kickback per game.

There was a post on pinside about Mousin’ and one of the suggestions there was to mod the center shot to drop the ball in the pops instead of returning to the inlane. That’s something I wanted to try as I thought it would be cool that way but I haven’t gotten around to it. The PAPA mods are a bit frustrating to me since they essentially take the kickback relight out of the game but I understand the need in that situation. I keep mine set on hard for the mousetrap letters so that you have to hit the targets to light multiball or Shatz the left inalne when lit—no looping the left orbit first time through. And in general, I have mine set up more difficult (I can’t simply hold up the flipper and expect a nice easy bounce over every time) so the center shot isn’t a great strategy for anything other than the kickback. I also pull off the longer ridged bats in favor of standard Williams style bats. It plays a lot better with those in general and makes center drains happen sometimes. With the longer bats it seemed like almost nothing went down the middle.

All that said, I might give this a shot. Seems fairly easily reversible so if I prefer stock I can just unhook it. Thanks for posting!

Knocking down that 3-bank 3 times for kickback, basically means you get one kickback per game.

You can change it in the settings to be lit at the start of every ball but I don’t have a problem with only getting one per game provided I have an opportunity to relight it. IMO the PAPA rubbers are so big that shooting for the center is too risky to be worth trying for even once, let alone three times. I think having the shot be difficult to control coming off the ramp is a better solution than simply being too dangerous to be worth shooting but thus far, none of the mods I’ve seen truly address that. That’s why I like the idea of throwing it in the pops.

Yes, I forgot to mention that it’s completely reversible and doesn’t require adding any holes to the playfield. Just use a standard stand-up target switch and you can use the set screws on the 3-bank bracket to secure it in place.

Personally I am not a huge fan of making a shot impossible, or nearly impossible, as a way of “correcting” a flaw in the programming. Ideally, if I could, I’d rewrite the code.

I like that allowing letters to be earned off of the center ramp simply offers another strategy for how to collect them.

I didn’t have any problems with it at PAPA and routinely went after it to relight kickback and light the millions shot . It’s why I adopted it on my machine.

I don’t like free kick backs, you’ll never get a free one in tournament play, so I never give them to myself at home. My mousin has kickbacks off by default you have to light it off the 3 bank to get one.

I don’t think I’ve ever seen anyone but Jorian trying to shoot it in the PAPA vids of the game but I could be wrong. When it was in the B qualifying bank this past spring, I went after it once after enough random hits had lowered the bank, missed by just enough, and immediately drained—so I felt it best to simply avoid and would probably continue with that strategy if I wind up playing it again at Pinburgh.

I played it in A at PAPA17 it was one of my go to games, and qualified on it.

Making the center ramp award mouse trap letters is just about one of the most over powered things you could do to the game.

Cayle, if you could change what the ramp awarded, what would you change it to? Bearing in mind that even knocking down the center bank is a risky prospect, so what would be a decent reward, that would make the center shot even worth it, without it being overpowered?

Relighting Kickback and lighting millions on the ramp. Oh wait…

I wouldn’t make the center ramp award any points, I would make it light or re-light something else that can only be collected from somewhere else. Encourage the player to shoot the center, then go back to shooting other things.

As is, its a no risk shot that returns safely on most mousin’s - having it award points just for the shot makes it a grind shot no matter what.

For example, after multiball 1, you cant loop geronimo’s to get mouse trap letters on standard settings because the spot letter light swaps sides. So, make the center ramp shot on mousin light the other spot letter rollover, so a skilled player would alternate geronimos and center ramps to build mouse-trap without having to shoot targets directly - that sounds fun to me. Or, make it so a center shot adds X seconds to the double playfield timer (with a max). That way the skilled player would start double playfield, then before it times out boost it back up with some center ramps, go back to other things, etc…

Cayle, if you could change what the ramp awarded, what would you change it to? Bearing in mind that even knocking down the center bank is a risky prospect, so what would be a decent reward, that would make the center shot even worth it, without it being overpowered?

Actually Cayle, what you’re describing about alternating is exactly what this mod does. I have tied in the center ramp switch to the left inlane switch. So, after the first multi-ball if you shoot geronimo followed by the center ramp you get a letter. Cool two-way combo that rewards skilled play. I can tell you, it definitely is super fun!

Granted, center ramp awarding letters can make that first multi-ball a bit easier to light locks for, if you happen to have knocked down the wall and survived. But, you could just as easily shoot Geronimo over and over for that first set of locks.

I think you’d really like the way the game plays with this mod.

Would you kindly post video of this modification in action. Different software settings would be interesting to see as well.