I was in this situation the other day during a group knockout on GoT. Ball one, playing Blackwater MB, just about to start hitting supers with add-a-ball still in hand when Midnight Madness started. Unsure how to handle it, I trapped 5 balls in play and asked the TD (who was in my group), but he wasn’t sure how to rule. Eventually it was decided that I couldn’t play MM as it would be an unfair advantage over the other players and was given the options to drain 4 balls, keep one in play and continue the game (post BWMB) OR start a fresh game and play after the rest of the group finished. I chose the latter.

Should the correct ruling have been to play on through Midnight Madness and just be screwed out of the mode in progress? The game was “functioning properly” (even though it was only 10:30pm) so I can definitely see how that would be the right call.

As for how MM scores on GoT and whether it would have been advantageous to play it or not, I have no idea. From what I recall in WPC games, it’s generally a lower scoring multiball. I didn’t think playing it out would have had more scoring potential than BW which is why I chose to replay the game. Plus I would have felt dirty about it if playing MM well gave me the win. Scores were under a billion on this particular match, so it’s not like it was HOTK or bust.

This just happened in our league Saturday night, although I’m not sure what the ruling was as I was in another group and forgot to follow up after it happened.

MM is stupid and serves no useful purpose other than to fuck up perfectly good games. It was cool the first time when it was Midnight Rampage, now it’s just yet another hackneyed garbage feature.

Yeah I would say that the way @jdelz 's situation was handled is the way I would do it.

Where it gets hairy is what if it’s ball three and you’re the last player to go and it’s a super tight match? I guess this is why you offer the player the choice, but still if I’m in BWMB and only need a few supers to take the game down, and MM starts, that would be a huge bummer.

For future I say recommend that the time on the game get set to have midnight occur at like 5 am.

Ehh, personally I think the ruling needs to be clear cut with no bearing on the game situation and choice should NOT go to the player. I felt awkward having to weigh the benefits of the decision mid-game.

That’s a good point too. Then if I needed to handle this for my events I would probably just say play on if it happens.

For future prevention of this, do all modern Sterns allow for enabling competition mode via holding flipper buttons prior to hitting Start. And does the Competition Mode remove MM?

Is this true. I always assumed it did. I have never seen MM on my GB, or even heard they attract mode bell for it (although I have also never set my clock).

I would have ruled play on. Seems no different that getting a random reward multiball from a mystery (or say outlane on a system 3). I don’t think it was an unfair scoring advantage, probably hurt, but did not cause loss of ball. I don’t like ruling that depend on rules knowledge.

I wonder if Martell add-a-ball would work for MM…

When this has occurred in competition, we’ve ruled play on. The machine is functioning properly, so it’s a “hey, that’s pinball!” situation. I might approach it differently if I had the keys and was able to set up machines for tournament play, but as a TD running her tourneys on location, I don’t see it as a violation or malfunction.

So then you can confirm that tournament mode fixes this too? That’s good.

Unfortunately, I can’t confirm that, I was just saying that I might approach it differently if tourney mode disables midnight madness and I had the freedom to set the machines we use to tourney mode.

“Functioning properly” would imply Midnight Madness would indeed start near midnight. We’ve had to make concessions for this on GB where we knew “Midnight Madness” would actually start at 10pm, primarily because MM is even more game-breaking on GB, since all the opportunities to rack up ghosts lead to easy video modes, Loopin’ Supers, and god forbid, PKE Frenzies.

As that’s a semi-random moment that the player has no control over, I’d say invalidate that game. And if the time was properly set such that an actual Midnight Madness would have been an issue, maybe the tournament’s taking too long.

Do you know how MM scores on GoT? In my effort to trap up I think I hit one lit shot for about 10M, but I have no sense of how that builds or if you’re just shooting everything for a flat value.

MM scoring by itself is just 100k per switch (x playfield multiplier). But it does stack with anything that happened to be running while it triggers. This applies to GoT and GB equally.

And yes, I have gotten it during Iron Throne once.

Oh wow. So in john’s case he could’ve spammed the ram for supers since he had those lit before going into MM?

Haha. If that’s the case, then I really blew it by “trying to do the right thing”! Not that “playing on” was one of my available options though.

Playfield lights gave no indication that BW was running concurrently with MM, so I thought it was something completely separate.

While the modern Midnight Madness is a small scoring bump, but otherwise no big deal, I believe any Midnight Madness rule must be applied across all games with Midnight Madness. If your opponent gets MM on NBAFB, it can be absolutely devastating, so keep that in mind for all the play-ons. Not that I lean one way or the other, in fact I am more of a play on kind of guy.

I wonder if Martell add-a-ball would work for MM…

Yes, it has worked for me.

For what it’s worth, I and a lot of other home use collectors like midnight madness. I just think it should be a feature that can be turned off. Which, yes, is a bit more work for the programmer I do understand that. But people do like it, I would prefer if it could be turned off as an option and then that would fall to the tournament director to remember.

Game of Thrones. I think Ghostbusters is the same but is in a different city than me right now. 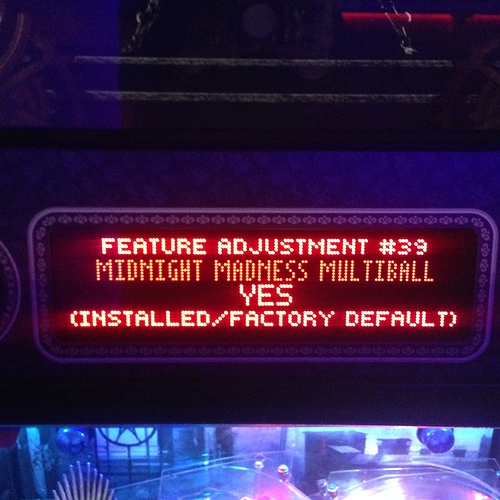