Is a second ball "stuck" on a magnet held ball stuck?

I was playing MET in competition, in 3 ball multiball ( grave marker) got a second ball stuck on the held ball for super. What is the rule here? Do I need to cradle up and wait for the timer to expire and release the ball. Is it not stuck because it is on a timer? Is it not stuck for other reasons?

Play on. This can screw you as much as help… same situation with 2 balls in play =

Stuck means it’s not going to unstick itself except with human intervention or a ball search. This ain’t that, IMO.

Stuck means it’s not going to unstick itself except with human intervention or a ball search. This ain’t that, IMO.

So because the magnet is on a timer.

Yes, but really because it’s on a magnet in general. Any magnet grab would have to be a relatively short event.

Is the ball stuck when it’s locked in the snake or groot’s mouth? Both of those can create a one ball maultiball situation. I put this in that category as well. 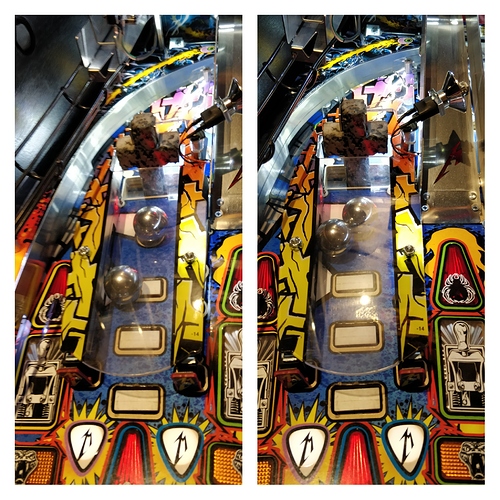 I don’t like like that on the left, you must cradle up and it is illegal to take even one shot. On the right, you have 30 seconds of safe single ball play.

I don’t like like that on the left, you must cradle up and it is illegal to take even one shot. On the right, you have 30 seconds of safe single ball play.

There’s always going to be a weird line where a rule applies on one side and not on the other. I still like my interpretation.

Stuck means it’s not going to unstick itself except with human intervention or a ball search.

If it’s a scenario where a magnet is suppose to hold a ball it’s not stuck. Regardless of how many balls the magnet catches. It’s the nature of a magnet.

The picture on the left will never undo itself. That’s a scenario that if you had two balls in play and did that you would ya e to get a tech to open the game. The one on the right if that was during two ball play you wouldn’t call a tech over to remedy it.

Game is working as designed.

To me, 2 balls stuck on a magnet is no different then dirty pool in AFM or stuck behind a phurba on Shadow.

As long as the ball releases when the timer expires or you get the super jackpot game is working as designed.

Your example on the left, the game is not working as designed.

a phurba trap is allowed by IFPAPA rules? I’m not sure about that, I always thought it wasn’t. (ok just found the verbing - it might be allowed, or not; depending what the TD says… it is a misuse of a game feature, but it can released through player action)

What about a trap between gate and castle bridge on Medieval Madness?

copypasted the two paragraphs here:
Any player who misuses a game feature in order to intentionally trap a ball during a multiball mode, such as holding in the plunger on Tommy in order to defeat the autoplunger, may be given a warning and/or have his or her affected game disqualified by tournament officials. Please note that intentionally causing ball searches is also prohibited (see “Delay” under “Player Conduct”).

In situations where a ball is trapped in a way that it can be released through player action other than shaking or bumping – for example, a ball at rest underneath a flipper or any other mechanism which the player controls – this is not deemed to be a stuck ball. Balls trapped in this fashion during multiball modes are not generally considered to be a rules violation, although the ruling will depend on the exact machine and situation.

The one on the right if that was during two ball play you wouldn’t call a tech over to remedy it.

This is generally true, but almost without fail when 2 balls are caught on a magnet there is weird residual magnetism that prevents >1 ball from leaving an exposed core. Of course you would nudge it out first and/or wait for a ball search (which I believe is the official rule anyway, waiting for a ball search), but generally speaking those balls probably won’t let go when the magnet turns off.

That’s true and If that’s the case and they are not letting go you won’t get a ball search in multiball and it’s is a stuck ball. A little Residual magnetism and a bit of non flush magnet core that’s very possible.

I lean towards the “by design” argument when stating the magnet-trapped ball isn’t stuck. The game rules require you to shoot at the magnetically trapped ball with another ball to score the super, and it’s a known fact that weak shots to magnetically held balls result in two trapped balls. Borg had to know that when he designed the graveyard multiball. It’s risk-reward based… if the super is lit and a ball is on the left flipper, do you risk a backhand and potentially two stuck balls and a blown chance at the super, or do you post-pass to the right for clean, direct shot that likely won’t stick?

Regarding the comparison photo above, I’d think the ball on left could be shaken loose pretty easily without pulling the glass…

do you risk a backhand and potentially two stuck balls and a blown chance at the super, or do you post-pass to the right for clean, direct shot that likely won’t stick?

Usually none of the above because the Grave super is such a low value. I’d rather use the single ball multiball and pick off CIU items or light FUEL, etc. The Grave magnet for the super is mainly just a good way to get a ball (or two) out of the way for a little while.

In the pic on the left:
When the timer on the magnet runs out, it’ll release and free the 2nd ‘trapped’ lower ball anyway.
If you continue to play on (as you would for the pic on the right) It would actually make the SJ shot harder.

I don’t see any difference in ruling for either pic, despite the circumstances being slightly different.

More frustrating for a second ball stuck on a magnet is in SM on the 2nd Doc Oc MB when you’re meant to free the held ball with the second ball. Too many times have I seen a weak shot hold both balls there until the timer runs out, and the hurry-up for JPs run down to the minimum