I’m talking about Houdini’s coded message from beyond the grave.

Any suggestions/adjustments to reduce game times in Houdini for a tournament? I was playing last night and we had games that were 10+ minutes long.

Can the rules be edited? Can’t seem to find the “edit” button.

I’m not sure of the process. Somehow you must earn access. I lamented about this on Pinside and an admin for the site provided me with access. His name was @keefer.

@YeOldPinPlayer, what does it say? Is it morse code?

Hmmm, try editing again… I would’ve thought the top post was a Wiki already, but it let me make it a Wiki, so hopefully it is now a Wiki for reals.

Now that Expo’s over I’ll get to polishing up the rule sheet.

There’s a few things missing, including the Great Jail Escape and the point bonus you get for playing through all 10 Stage modes. It’s worth potentially 3+ million points and happens without much fanfare.

Thanks! I haven’t had time to update for the latest release.

happens without much fanfare.

A little more fanfare coming soon, it will also now require a return to the stage, after the last stage mode is finished, to collect it.

Can’t wait for the next update. Thank you for your commitment to making Houdini’s code better and better, Josh!

A ton of improvements and fixes in this release.

A ton of improvements and fixes in this release.

@JimiWolf on time for City Champ?

It seems that the current version is now 19.4.7.
https://www.american-pinball.com/support/updates/

Was there a big change after 10/1/18 to the way the Encore Bonus is calculated? For example, at 1:31:28 in this video from 10/1/18, it seems that very different rules were used to calculate the Encore Bonus from those described in this Wiki. https://youtu.be/5lMN4NkFXUk?t=5488

The link I provided is to the following Youtube video:
“SDTM Episode 75: Face-Off Houdini Edition (check out the score of that last game!)”

Likely a change in scoring. On old code at the Pinball Expo tournament, it was worth a really high amount of points, and it was unclear on the display how it’s calculated.

I reached Encore twice at Pintastic here on new code. Don’t remember how it’s calculated. I know the total # of points you’ve scored in all modes is involved. Perhaps bonuses for completed modes as well?

Scoring to me feels a little more balanced, but if you work hard the awards are valuable. Managed a solid 1.7M jackpot and doubled it (via 2X stage alley; Milkcan Multipliers are ignored). Josh also added new sound and display effects. Unlike old code, where Encore Bonus was awarded instantly, now you must shoot the stage to collect it.

I got it again on my next game and took a picture. This jackpot by the way was NOT doubled by the Stage Alley, so by just shooting the stage I missed out on points. 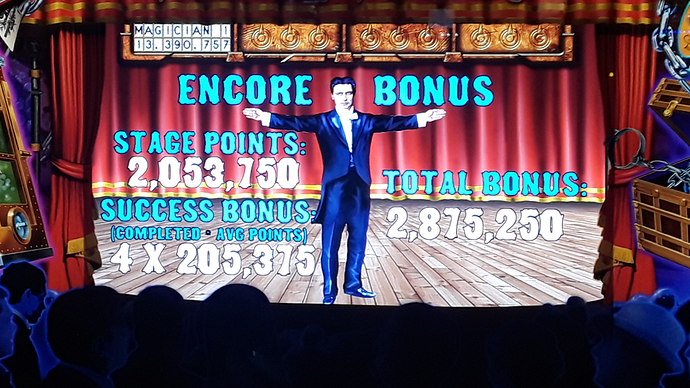