Hey everybody - I’ve been running a monthly matchplay and it seems like my IFPA points end up pretty low compared to other tournaments. Can someone help me understand what I am doing wrong. We do 8 rounds head-to-head, with a single elimination final for the top, less than half (per the IFPA guidelines). What should the TGP be? When I look on the average IFPA points on their site for tournaments they are pretty high. I just want to understand better, so I can maximize the points for our players.

Pretty easy for this format. Every round played is 1 game toward TGP.

In my hypothetical, you’d get 16/25 of the total possible points your event would have been worth if you played more rounds/games.

You can see here what my gauntlet tournament at Pincinnati would have been worth if we had the same players, but a different format 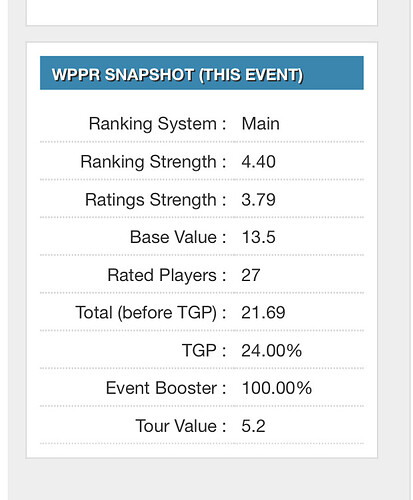 You didn’t say how many players but let’s assume 32 so 16 can go to finals. If you are doing single game single elimination, that’s a very poor format for TGP. I would suggest at least a best of three single elim.
In reality, most head to head formats are not worth a whole lot and you’d be better off doing matchplay in groups of 4. 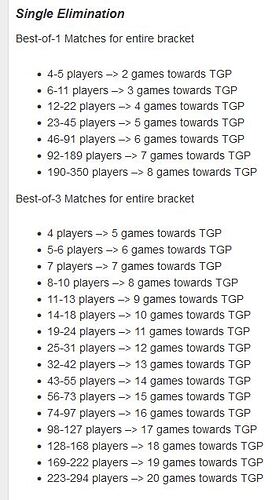 Another important factor is the experience level of your player base.
Every player who has played in at least 5 IFPA events brings .5 points to the tournament.
Until they reach that 5 events, they bring 0 points.

Yeah, TGP is constantly misused. Tournament Grade Percentage.
Even in group discussions by state IFPA Reps, I constantly see things like 25 TGP. When what they mean is 25 games played. It definitely adds to the confusion.
The main thing to remember is every meaningful game played gets you 4% towards a possible 100%.