I went to Home Depot tonight to pick up a fresh bottle of Goo Gone for some Mylar removal. Last time I purchased Goo Gone the choice was easy- there was Goo Gone and Goo Gone Gel to choose from. Now there seems to be an entire department dedicated to glue removal. Has anyone used something significantly better than the traditional Goo Gone? 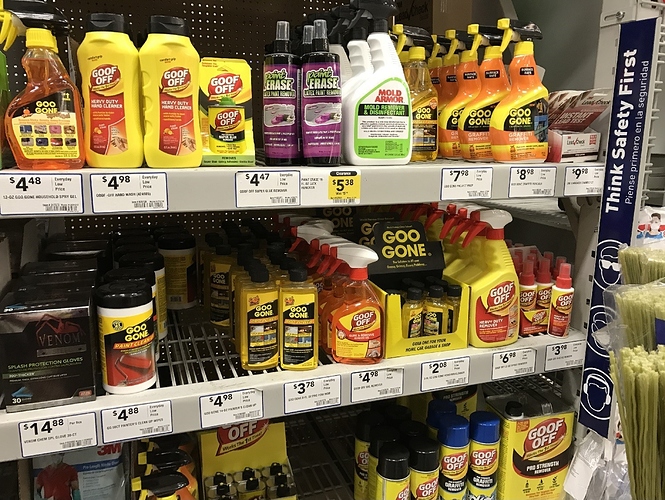 I don’t know if there’s anything better but goof off will remove paint. I wouldn’t mess with that stuff.

i know the original Goof off is a serious no no, but they have a new orange based ones specifically for glue removal. not sure if this one is as toxic to the paint as the original.

I’ve found straight Naptha works pretty much just as well as GooGone - I’d avoid or be super careful with anything labeled GoofOff that stuff will strip a playfield right down to the wood. The method I’ve used that worked best was freeze spray to remove the mylar (leaves glue behind), then a light sprinkle of flour evenly over the glue area, paper towels flat on that, drizzle on naphtha and then cover the area with a layer of aluminum foil and a notebook to hold it down. Wait 20min or so, remove foil and towels and use a plastic razor blade to scrape up the soft glue and rub residue off with your thumb. Plan to have the time to do the removal all at once… don’t freeze and remove the mylar and then leave the glue sit for a week before working it as exposure to air makes it much harder to remove.