Finals format with the most play?

In the New England Pinball League, our finals are a series of four game matchplay rounds, with half the field eliminated after each round. A perennial request for improvement is “hey, I drove from Maine to Massachusetts to play in this finals, but then I got knocked out after four games. That… sucks.”

What are some other ideas we can consider for finals? Some constraints- we’d like to keep it as one big finals for the league. We’ve experimented with state finals (less driving, less people) but have gotten feedback that people prefer having finals for the whole league. Your season results are used for placing into divisions and seedings, so the format has to preserve the sense that better performance in the season gives you an advantage coming into finals. And the finals have to comply with IFPA guidelines because we want our magic pinball points. And our location isn’t big enough to accommodate a “loser’s bracket”, unfortunately- we’d rather use any increase in space or number of available games to invite more people to finals.

One suggestion that’s come up- add more games to the first round. What else can we think about?

“hey, I drove from Maine to Massachusetts to play in this finals, but then I got knocked out after four games. That… sucks.”

They’re not going to find any sympathy from half the players at Nationals or the Circuit Final!

They’re not going to find any sympathy from half the players at Nationals or the Circuit Final!

Circuit Final is wayyyyy better now compared to the early years. I flew out for one game of Demo Man the first year . . . then I was done

Hmm one game of Demo Man and finish not last to advance, or play 4 games (Freefall, Galaxy, Catacomb and Seawitch) and hope to flip enough to finish top 2 in the group? That’s honestly a tough choice, but I don’t want to stray off topic

Try double elimination head to head. Best of 3 or 5.

Or single elimination best of 7.

All those could have you out in around 4 games though. Not much you can do but play better.

A four game round is pretty generous, IMO. We have three game rounds for our league, and I don’t hear any complaints. Houston traffic is no cakewalk either. It’s just the nature of finals— win or go home. You can always have a consolation tournament for the players knocked out in the first round or something so people can keep playing.

We’ve run a regional Selfie League for two cycles now. Qualifying lasted for a few months, and A-Division Finals are the standard four-game match play format where two people move on and two are eliminated. If people are eliminated in the Round of 32 or Round of 16, they have the choice to be entered into the B-Division side event, which we’ve run as a Group Match Play with Progressive Strikes (12 Strikes). Essentially, it gives a person a shot at something after being eliminated and gives them a reason to stick around and play more pinball, especially if they get eliminated early.

After the first set of Eliminations in A-Division, we get the first round of B-Division going. After the next set of eliminations from A-Division, those who are eliminated can join the in-progress B-Division and will be given the same number of strikes as the current leader + 1 more strike.

The winner has gotten a trophy of “B-Division G.O.A.T.” and top three get a small cash prize. I think it’s been a fun thing to keep people around and playing more competitive pinball after being eliminated from the main event. 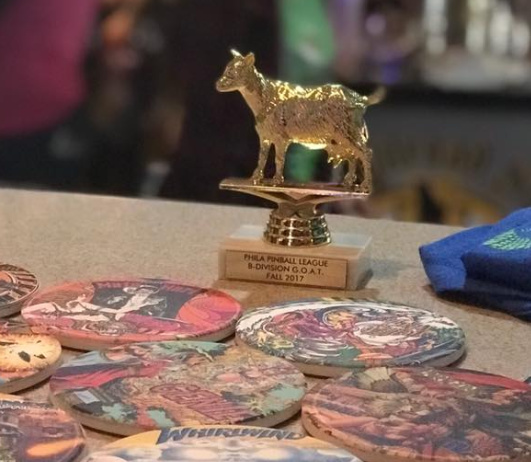 I have liked this format because you still have the cut-throat action of A-Division where you need to keep winning, but there’s still some reason to hang around and play if you get knocked out.

I have generally been against head-to-head Strikes formats, but with the recent introduction of Progressive Strikes and now Aussie Strikes, I think this provides an opportunity to have more people stay involved in an event longer before being eliminated while ensuring the event doesn’t go on for exorbitant amounts of time. At the recent Summer Classic event we ran, A-Division (Top 16) was normal PAPA Style, but B (17-24) and C (25-32) Divisions were four-strike Aussie Strike.

It would be interesting to run a Finals purely from a Progressive or Aussie Strikes perspective while still trying to figure out how incoming seed maintains their advantage. We ran it so that game assignments were random, but order choice always belonged to the higher seeds in the group.

A perennial request for improvement is “hey, I drove from Maine to Massachusetts to play in this finals, but then I got knocked out after four games. That… sucks.”

You could also follow suit on SCS finals… For State SCS finals, I believe this is part of why a number of states now continue the Consolation bracket aspect for those knocked out in the same round: to give players more chances to play competitive pinball. The downside: a number of players will not want to continue playing in a consolation bracket that merely determines their 9-16th position and whether they get 0.6 WPPR or 0.08 WPPR.

For finals? No thanks. Round robin should be for qualifying only.

For finals? No thanks. Round robin should be for qualifying only.

I like that: season matters, who you play is fair, you get 9 games.

Generally the people in 10th are happy to have the chance to climb in the ranking, even if digging out of a 4 point deficit in 9 games seems unlikely.