Without a schematic at hand, I was wondering if anyone could tell me whether it might be possible to hack the scoring to always be on 100 point bonus for all 5 balls? I like the ball 4/ball 5 100/200 bonus value ordinarily but it would be better for pingolf it wasn’t so back heavy.

Alternatively, if anyone has a schematic for Snow Derby they don’t need anymore, I’d love to buy an original to go with the game instead of giving Marco $22 for a photocopy.

So with a little observation/detective work, I was able to figure this out on my own. I think this makes the game scoring far more balanced, especially for pingolf, where the 50/50/50/100/200 bonus rules were going to have everyone getting a 4/5 at best and probably a 6/7 at worst. It could be too easy to roll if the setup is forgiving but that’s not hard to take care of with some pitch/flipper adjustment. If anyone would like to do this, I’ve attached my notes. Pretty straightforward… just have to bend 4 switches permanently open/closed. This will set it for 100 point bonus on balls 1-4 and 200 on ball 5. I think it could be made to go to 200 bonus for all balls or 100 for all balls by either closing the switches on, or disconnecting power to the 5th ball score feature relay but I haven’t tested that at all. I imagine this would be the same for Snow Queen also. 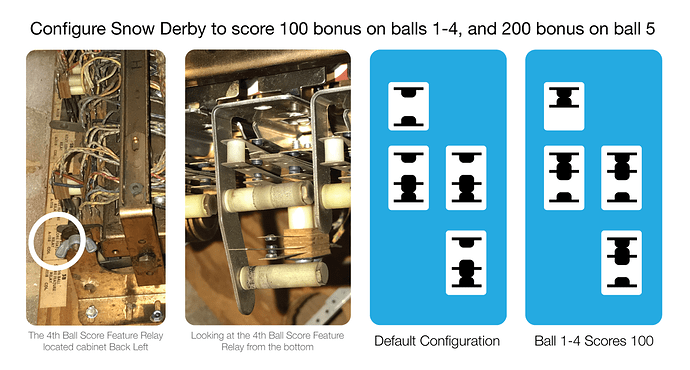