I’ve been wondering lately if a player’s pinball stance when addressing the machine really matters. And if so, how much?

Is it better to have one foot in front of the other with a wide stance? Close stance?

I suspect that one thing affected by stance the most is the angle your arms are to the machine, which should affect the way you’re able to nudge the machine.

I don’t have a stance named after me, but I will share my story.

I never really paid attention to stance. One day I was playing Spiderman at work and couldn’t hit an upper flipper venom shot to save my life. I swapped my feet and all of a sudden couldn’t miss. Ever since that day I have tried to keep my stance consistent. Of course I saw photos of myself at buffalo where I was completely out of my playing stance.

Unfortunately, the actual moral of the story is that I depend too much of my hip twist and donkey kick to find my timing on machines.

Since I’m shorter and do not have as much leverage as someone who might be bigger/stronger I’ve found that my stance matters a good bit. I’ve found that if I stand too close to the machine and try to move it with just my arms that my body gets thrown off-balance, and I can sometimes push myself too far away from the game to press the flipper buttons. I also keep all my weight on my feet but mostly on my front foot when I’m playing and keep my body in a very familiar position. My goal is to be very light in the hands/arms when I play but I need to have enough leverage to make a quick nudge on the lockdown bar without getting thrown off balance. Basically, feet spread apart until I feel “locked in” and I put maybe 70% of my weight on my front foot. 30% in back foot. If I need to make a big save -> transfer upper body weight to machine and use back foot to push against the floor

I don’t think there is a ideal stance in general, but only ideal stances for your body type. I haven’t found my perfect stance yet because I’m too small to get good nudging leverage without standing further back, but too short to see the whole playfield when I do. I’ve pretty much given up on seeing the PKE rollovers on GB. At least I’m probably more comfortable than the super tall guys that have to tower and lean over the machines.

I don’t really know how it started for me. I’m sure that growing up around other low-players like Lyman and Werdrick was a big part of it. All I know is that at my first Pinburgh I felt like I needed to shake things up, so down I went and it stuck. It feels natural. I will say that there is one very practical thing that happens when I get into the stance - it is like a switch goes off in my head that says “Hey, its time to turn your brain to pinball mode.” I focus on the game, my gears start turning about strategy, and mentally it starts that mindset switch from “Hanging out” to “Getting shit done”. I have definitely noticed that in situations where it is very crowded or I’m playing in a doorway or whatever, I do worse. Which is not to say I do amazing every time I play (anyone who played with me on day 2 this year can attest to that) but more that it is hard for me to find that zone when I don’t.

Also a lot of times people trip over you which is mostly just funny to me now.

I’m 6’3". For me I have multiple stances. For older games that stand a tad taller and are not super steep, I stand tall at the game and stand with one foot on top of the other or crossed over the other with most weight on one leg. I know, weird.

For newer games I have to hunch over quite a bit to reach the flippers, and not lean on the game. If I lean on the game the tilt bob will constantly move, so I try to not influence that bob until I have to. This is also typically with one foot in front of the other switching my front foot as MB or other important modes start. Haha.

Either one foot in front of the other or on top of each other. All my weight on one foot that I can quickly shift all my body weight into a nudge. I don’t lean on the game at all unless I am tired.

I’m fat so I do a lot of moving around so my feet don’t hurt, but my general neutral stance is slightly wide (tall), usually with one foot in front. I’ve found that I play best if I stop thinking about how I look while I’m playing, and I’ve found that if I stop thinking about how I like while I’m playing I start dancing around in front of the machine. It’s embarrassing in retrospect but in the moment it makes perfect sense (and what the heck, who cares?

I get that too, when I’m the most “In the zone” is during a really low crouched down stance. I wonder if there is some real physiological phenomenon attached to that.

I have a pretty much normal side by side stance. I keep most of my weight on my left foot (right handed). I occasionally donkey kick, so don’t get too close. My stance is long (not wide d;^), so my head is lower than it should be. Sometimes I can’t see the shoot again insert when the ball saver is running. If I had to change anything, I’d stand a little taller.

Jeff Neuman had to change his stance after his injury. It looks unusual, but he’s an excellent player. You can change your stance and still be a badass player.

Does that wear down your back/ neck during long play? Like Greg alluded to I think your concentration goes up the more tense you get but maintaining that posture over long play it’s good to have a backup stance as it were (Me being the one foot on top of the other Karate Kid style)

I don’t really have a problem with pain because unfortunately I’m not in the zone most of the time. It’s just an observation that I’ve made that that during my best games I’ve naturally moved myself into that position. I normally play much more relaxed, even crossing my feet.

Also since I’m 5’3" it doesn’t take all that much for me to get low to the playfield.

Its interesting, I used to be much more exclusively a lower playing, wide stance player. But I’ve noticed I’ve gravitated over the last couple years to a bit higher stance as the lower gets tiring. I’ve definitely started to appreciate your stance.
…But old habits die hard - I do notice I drop back into the old attack mode whenever I’m particularly engrossed in a game. Lefkoff’s said he can tell how engaged or motivated I am by my stance… I’d be that’s quite true.

I’ve pretty much given up on seeing the PKE rollovers on GB.

Off topic, but, It actually took me a long time to notice that there is a reflective plastic on GB that shows the lanes and ball. I still forget to use it. Of course you may already know this, and the viewing angle may not work for you. 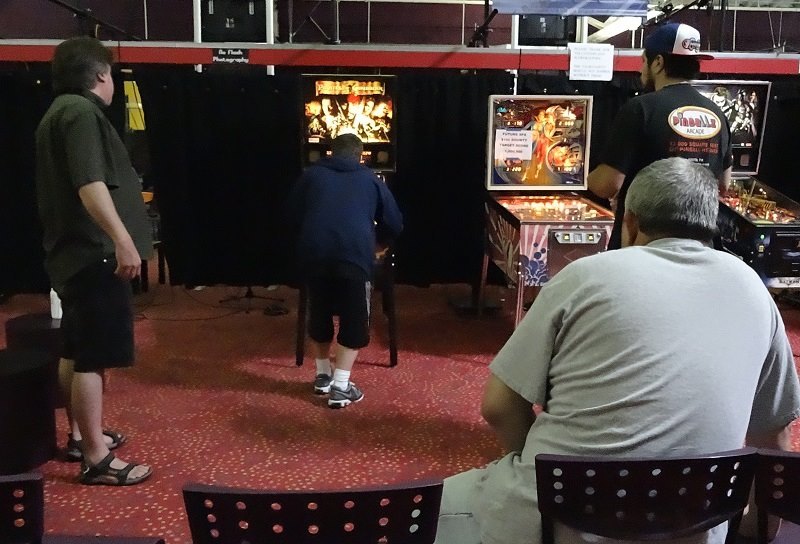 Here’s my stance when I’m in the zone. Pretty much just stole it from @trent. I’m not too tall, so I don’t really need to crouch like in this picture. The only times I actively decide to move my position is if I’m about to attempt a really tight shot. Pretty sure 100% of the time on GoT when I shoot the dragon from a trap I duck down to get a closer look at where the ball is on the flipper as I’m making a shot.

I tend to move around a ton if the ball is moving quickly. I could probably do without that noise

Thanks for all the thoughtful replies.

I typically do the one leg in front of the other leg stance, but not too wide and I don’t get too low. I think the thing for me is consistency, as I don’t normally pay attention to what leg might be in front of the other. Perhaps building in a consistent routine where I align myself to the machine the same time every time will help my play.

I have a friend who has what I like to call “The Reverse Dunlap” stance. Weight on her left leg, right leg extended forward under the machine. I have no idea how she stands like that for extended periods of time.

I’ve been trying to find a more comfortable stance for myself. I put all my weight on my left foot, but I’m not good about changing that and then I get sore.

@nicoleanne noticed the same about me when I tried to stand straight up for a while. The longer a game went the more prone I became to stretching back out, like it was pure instinct.

My favorite stance has to be DNO’s little “Donavan shuffle”. Once he gets going you can watch that nice pitter patter of little feet.

I’ve given up on any sort of stance . . . I’ll just throw everything everywhere while yelling not like this.