Congrats to Nicole Bernier, the first ever WIPT champion!!!

What an amazing finals to watch. Nicole’s play was unstoppable, and I’ll be the first to admit I teared up when her win was decided and the contestants showed such a huge level of affection and support. More of that in ALL our pinball events, please! Huge thanks to the organizers. So great that this happened.

I was very bummed I had to leave for the airport before the WIPT finals were over, as that first game on Total Nuclear Annihilation was so great to watch. I, too, enjoyed seeing all the support among the participants and from the crowd during the event. There was even a decent amount of spectating during the preliminary rounds of WIPT, which was nice to see.

A side note re the video (and the stream): I thought what was displayed on the monitors (and thus on the stream) looked pretty great. I was really quite excited by what I can’t think of calling better than “skill shot cam.” That was a fun touch. I haven’t yet watched the stream of the Pinburgh finals, though I pulled up a bit in the airport and like that the games seemed mic’ed so you could hear callouts, etc. I hadn’t been able to hear much on site, but in the stream it was very audible.

Anyhow, congrats to Nicole as well as Priyanka, Shawna (a great competitor in my second round of day 1), and Gretchen, as well as the other 60 competitors for such great pinball.

As a personal friend of Nicole it took all my strength not to start balling like a baby when the perfect storm of scores occurred to give her the win after only two games. Unfortunately the best part wasn’t on stream - it was when all the players and commentators gathered at the bottom of the stage and were tearing up in joy for each other. It was something special to see. I can’t wait to walk into Replay next year with Nicole and see her face when she sees her name hanging from the rafters.

I can imagine the giant glom of happy-teared WIPT participants - I wish I could have stayed for the finals and taken part in that. Happily sobbing in the back of a could do. I am so, so happy that WIPT went so well and that Nicole came out on top. The whole thing makes me so happy.

Aaaaand now I’m getting misty-eyed all over again.

The Champs made her first public appearance at the WIcked Pissa Pinball Pit. She’s working on getting the Fireball endorsement. 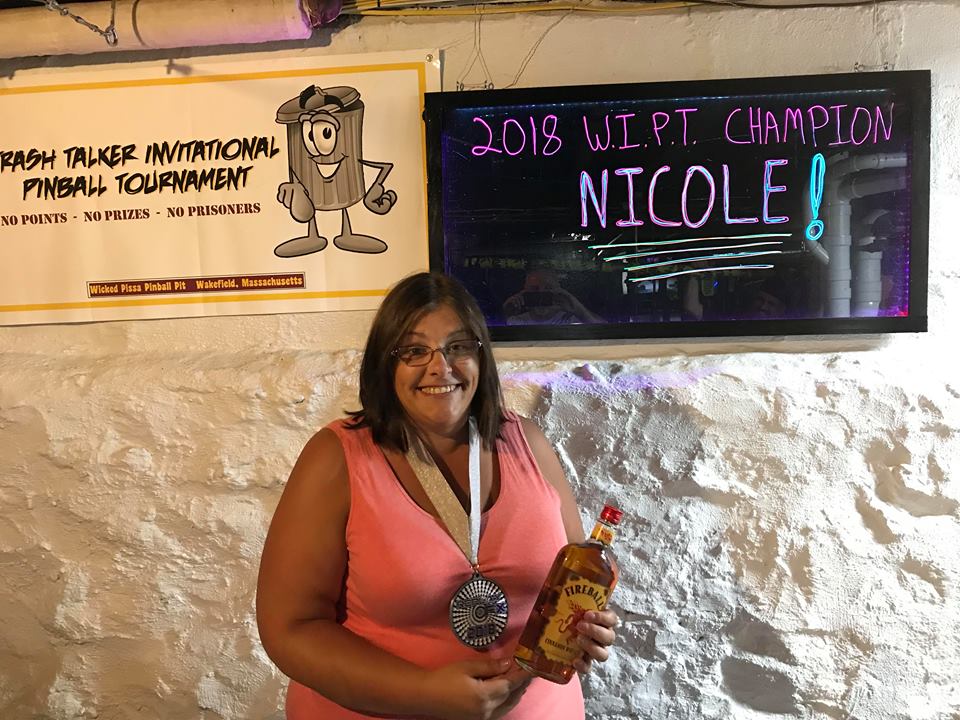 Are there results for this tournament posted somewhere (aside from first place obviously)?

It’s all on matchplay: https://matchplay.events/live/wipt2018