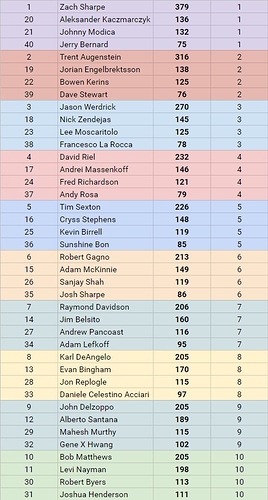 Will there be exactly 10 machines in the circuit final bank, or more? If only 10, unless you allow game waiting, then the last group never has a game choice , e.g. JPW just plays last all day. If waiting will be allowed, how many groups can queue?

Good stuff. Thanks for posting this Evan.

So I guess the million dollar question for me is - when will alternates start being pulled, so I can adjust my travel plans?

The PAPA site says that people will be promptly notified. They pay close attention to these details because they’re aware of the pain that is last minute travel arranging.

“Final Circuit standings will be determined promptly after the last Circuit event. Any player in the top 40 of the rankings will be invited to the Circuit Final. The tiebreaker for the 40th position will be determined by whichever player has the highest finish in a Circuit event in that season. If a tie remains after a single event, the next highest finish will be considered. This process will proceed until the tie is broken, or a coin flip is required.”

@mhs What about tiebreakers in other positions? Are they the same? I used this logic for Tim/DJ and Ed/Levi

i can’t imagine it would be any different.

I believe the same logic is used for the rest of the seeding. Based on this, Brian Dye is the 41st seed and first alternate, with a 43-point event.

What’s interesting is the next 6 people under Dave and Brian are all at 75 with only one event to show for it. If anyone else backs out, then there’s going to be some coin flip action going on

The rules sound like they could use finishing position below 24th in other circuit events for those tied with one 2nd place finish each. I.e. someone who placed 30th at another event would outrank someone who placed 40th or didn’t enter another at all. I can’t see that on the mobile version, but I assume someone can check quick enough.

doesn’t Jorian get a spot as the defending champion?

EDIT: This is assuming that Karl Deangelo and Brian Shepherd are not attending

Confirming that I am not attending.

No way to convince the Mrs then?

did the prompt notifying begin yet. I already booked the hotel.

Checked when I got home. Scott Kutheis’ best sub-24 finish was 32nd at Florida; Robert Byers was 60th at Pinburgh; Joe Scaletta 231st at Pinburgh. For Paul, Rob and Kevin, I saw no other circuit events.

That was because I had no other circuit events!

No waiting allowed. There will be 12 games in the Circuit final bank.

Steve Bowden is not arriving at PAPA facility until Friday so that bumps one of the top seeds up.

Doug is this streaming this year?