The event will consist of three tournaments: A single, main tournament (qualifying Friday and Saturday, finals Sunday) and two classics tournaments (one Friday, one Saturday) 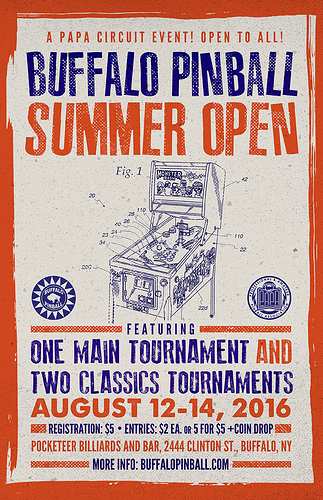 Not sure how much work it would be, but is that flyer (blown and put on some fancy thick paper) going to be available for sale? Perhaps some of the other guys who do pinball flyers here on the forums could post their opinions/info on the subject?

You’re not the first one to ask about the poster. I’m planning on having some printed up and at the event. Haven’t decided if they’ll just be freebies or if we’ll be selling them but they’ll be 11" x 17" in size. I’ll post up when we have them.

For those of you joining us from out of town, we’ve just secured a discounted block of rooms at the Millennium Buffalo hotel. Details are on the site: https://buffalopinball.com/papacircuit/location-and-travel/

Also a heads up I was able to Priceline a hotel near the airport (Holiday Inn Buffalo Airport) for $78/night. I used “name your own price” and 3 star rating for what it’s worth. Shows it being 8 miles from the tourney location.

Yes, the best rates were all at hotels near the airport. 8-12 miles away, depending on which side of the airport you’re on. But be aware, the “fastest” route from some of them to the site goes on the NY State Thruway where there’s a toll. You can apparently take one stretch of the thruway without a toll, but not all of it. Check your sources first to be sure. The “avoid tolls” routes were only 2 or 3 minutes slower.

The section of thruway between the airport and the tournament venue is free so no worries there.

Bumpin’ it up. Just over a week to go!

Are you good on volunteers? I don’t remember seeing a call for scorekeepers, but maybe you have this covered by the buffalo crew. Excited to finally play unlimited pump and dump. Oh, that reminds me, better hit up currency exchange this week.

We can always use more volunteers! Nick had posted the call on the Facebook event page but here’s details. Please sign up for as much as you’d like:

For every 2 hours you volunteer, you’ll get 5 free entries. You also get a special hour of volunteer qualifying only from 9-10 a.m. on Saturday. To sign up, check the link and message Nick at buffalopinball@gmail.com with the time slots you would like: https://docs.google.com/spreadsheets/d/12Jpc3CH12ElTyh0s4Q5qXi2gHp-_QVBh3o0pN714-pU/

For those who can’t make it to the tournament, here’s our Twitch stream info and schedule: https://buffalopinball.com/papacircuit/twitch/

Buffalo Pinball is a partnered Twitch channel, offering live pinball gameplay and tutorials from a collective of streamers most evenings at 8 p.m. Eastern. We also stream special events, new pi…

Starts at 8. You’re going to have to/get to listen to my analysis on Mustang and maybe others. Kevin is here too.

My day one recap, that probably no one cares about.

Early in the day, things were not too busy, and you could get on classics pretty easily. Main was basically length 1 queues much of the day while classics was on.

There were some early space issues, that got a better as things got moved around. I still think setup was sub-optimal, but I will save that feedback for Kev and Nick later.

Classics was a tight battle at the cut line. Huge congrats to @timballs and Jake for putting up huge last games push Greg and I out. Good to see Jeff T take the the trophy home, and again a great Canadian representation in Buffalo.

Jumping on the stream with @K3V was fun. Sorry to the internet for having to listen to me.

What I found best about this event compared to other events I have been at was Randos off the street joined. People came in to play pool, not knowing anything about the event and joined. That is awesome. Maybe that is happening at other venues, but many of the other tournaments the tournament area feels like this special closed area for the “elite”.

That said, distraction, people crowding my space while playing, standing beside me talking about my game is much higher here than those more controlled environments.

Day 2 should be a blast. Hope more people are going to make the trip today.

Had a great time on Friday. Had to go back home for work today

Almost made finals in Classics! Also helped that i started playing at 11am, head start on some of the regulars i usually cannot compete with.
Space was the only issue I saw, and that is more a limitation from the venue, not from the Buffalo Pinball crew.
Thanks to Nick, Kev, Martha, Bruce, Steve, and all the scorekeepers. Hope there is another one next year!
Also, I forgot to buy a poster

Wish I was there but I decided against it with a trip to Japan coming up next week! Hope to see you guys next year.

RCT:
“Like War Games, You win the game by not playing”
"He probably wants to dial in his shots to prepare for the next round, so in this case, he needs to dial in his cradle."
Great stuff!