Buffalo Pinball (BP) and Buffalo Pinball and Arcade Company (BPAC) are two separate entities. BPAC is the entity operating the games. They are collecting as much as the operator did for the past two summer opens. There is a price increase this year on classics, in that they are now $1 instead of 50 cents. We believe this is justifiable as the classics will be in much better shape than they were last year, which was a significant problem with the previous operator.

I’m going, Kevin and Nick put on a solid event, I got no issues with the fee structure. The only change seems to be an extra $10 for registration which makes sense to me since it looks to be happening at a much nicer venue.

At the previous venue all the pinball machines were on site, Nick and Kevin are going to have to put in allot of work to set this thing up to be pinball tournament ready.

They are being up front about it and have been putting on a solid event for years, I’ll be happy to not have to carry around $10 in quarters in my pockets. I’m happy to support this event.

You’re welcome to ruin your event however you like

The percentages are the way they are because we choose to keep the entry cost low so players can play more without having to spend a significant amount extra. This is something that has been received favorably from those who have attended the past two years.

Math checks out. At 100 participants with an average of 20 entries per person, Buffalo Pinball people are looking to net $3900 (before facility costs) while the prize pool is only $2000 (before trophy purchases).

Don’t forget about the toll to get on to the island too!

Math checks out. At 100 participants with an average of 20 entries per person, Buffalo Pinball people are looking to net $3900 (before facility costs) while the prize pool is only $2000 (before trophy purchases).

Again, Buffalo Pinball (BP) and Buffalo Pinball and Arcade Company (BPAC) are separate entities. BPAC is providing the machines and techs during the tournament, and will receive $0.50 of the machine fee, with the other $0.50 going to the venue. 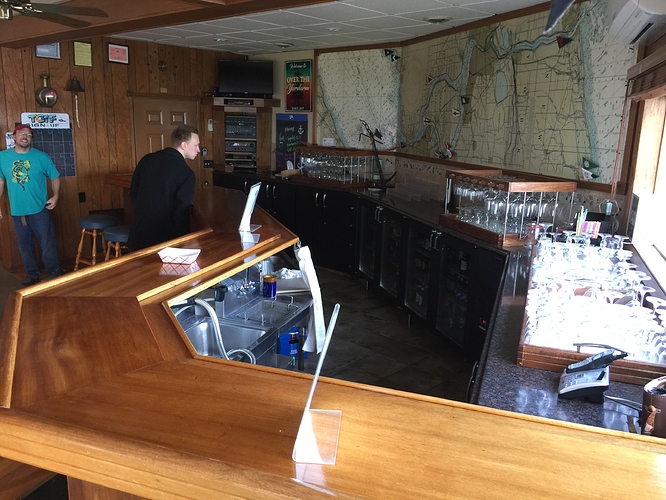 But the real question on everyone’s mind is, does the lock on the bathroom door work?

It does. There’s even paper towels and toilet paper!

There’s even a staff on hand with a set schedule to clean the bathrooms! True yacht club luxury!

If we have 130 people again this year like last, Buffalo Pinball’s cut will be $2,470, which will be used to run the event.

This year’s event is more challenging, as Vengeance pointed out, in that all games will have to be transported to the venue, rather than be onsite as they were in the past. BPAC will also be taking many of the games off route for the event, which is a loss of revenue that may not be compensated from the tournament (the games will be off route longer than just the tournament as they will have to be gone through to be tournament ready. Also, BPAC will only earn $0.50 per game played during the tournament, rather than $1 that they charge on route).

With that said, we’re very excited for this year’s tournament. Our past two tournaments have been major successes based on the feedback we’ve gotten. There were issues though, namely that we didn’t have control of the games and venue. By moving to a new location, we now do. Without a doubt, we can now provide a much better experience and address issues such as space, comfort (AC, locked and clean bathrooms, etc), and better working machines (Classics for example was a mess last year b/c of the operator not having the games ready, something we didn’t control in past years).

This tournament will be a much larger investment in time, energy, and effort than the past two years, but I believe we’ll be providing a much better experience. The $10 additional registration cost and the 50 cent increase in classics cost is extremely low considering the additional time and effort going into this. Most importantly though, the value in terms of the better experience we intend to provide is well worth the small increase in cost. We can’t wait to see everyone in August!

It’s too bad that the discussion of this event has started out on the monetary issues, rather than the excitement of the new venue. Nick and Kevin run a top notch event and I plan to be there again this year. Don’t let him bother you, boys. Those that have been to BPSO know what kind of quality event to expect and with lower costs to the player than the majority of other circuit events. Looking forward to it!

Hope I can make it this year! Fun tournament with a great broadcast. Hope the new venue works out!

I’m not trying to bother anybody, Chris. I have a lot of respect for any team organizing this type of event, it takes a ton of time and work, and I haven’t said anything personally disrespectful. I’m just surprised by these financials, and I say this as someone who has run tournaments where we must pay for game transportation and operator time and effort.

A tournament taking a $60 entry fee and only putting $20 toward prizes is not acceptable to a lot of players. The detail of who receives what portion of the fees does not change this. Other similar events have higher prize pools and lower fees.

The way I see it, the fees are 100% transparent and clear as day. That’s whats important if less than 100% is going to the prize pool.

If there is a large distaste for this I am sure they will see it in attendance and entries and decide what to do differently or not do differently next year. Doesn’t really matter what other events are doing.

Agreed throughout, and glad for the transparency.

There is a bar at the venue

…but do I have to PAY for the drinks? If they’re free, that’s some money back (for some people)!

The 2018 pre BPSO warmup event is a flip frenzy!

Love this format! A couple thoughts though,

The break in the middle probably isn’t necessary. You really want to get those three hours done as quickly as possible…also that 6:30-7:00 scheduled for break will definitely have some stragglers playing through that half hour even though everyone else is getting their break. I would suggest having a longer break in between the qualifying and the playoffs.

Another thought is the highest number of points being the qualifying determiner. We had @BonusLord finish the three hours with significantly less games than most others because he played longer playing games, AND he is freakishly good at pinball. If you put win% as the determining factor then he’s not punished for playing well. As an example, a recent PPP we had in Cleveland Andy finished maybe 9-2 but some players had as many as 20 games.

Just my two cents is all