Best path to a high score on GNR within 3 minutes

Slash donated his GNR machine to the Rock Hall for their new exhibit, and I’m holding a very casual tournament on it as part of the celebratory event they are holding to hype it’s debut.

Since it is technically an “artifact”, it’s surprising that they are allowing it to be played at all, but there are some limitations. During the official event, each person whose name is drawn to play the machine may play one game for up to a maximum of 3 minutes.

The majority of the people that will be playing the game will be casuals and will almost certainly not even survive for 3 minutes (no ball save), but since winning scores on GNR seem to usually be the result of a repetitive and lengthy grind, it got me thinking:

In a high score contest with a 3 minute time limit, how would you play it? Plunge and drain balls 1 and 2, start pity multiball with super pops? Pick mystery each ball and drain immediately unless you get mega pops?

On a regular GnR that isn’t setup hard (ie no rubbers guarding the band member lane, non bouncy rubbers) I would probably still just go the regular strategy. Its an easy shot from either flipper and would think you could start full multiball pretty quickly and then ride out the 3 mins going for jackpots while getting superpops.

Draining balls 1 and 2 and starting the pity multiball on ball 3 is high risk, but I think it would give you the best ratio of time in multiball vs time in single ball play.

I forget, is there a set pattern for choosing Mystery on the plunge? If the third award is Mega Pops, that would be significant.

There is a pattern, but I’m pretty sure it’s only valid for Tournament Mode, and I guess I would seriously doubt that game will be setup for tournament mode. If you pick mystery all 3 balls, ball 3 will in fact be mega pops in tournament mode. The other 2 awards aren’t worth much, seriously putting it into question if you should go the mystery route instead of super pops every ball.

With @ClevelandPinball being in charge of game setup for the event, I’d think he would put it on tournament mode, just as a general modus operandi. If that’s the case, I would totally go for Mystery/drain on balls 1 and 2 and hope to go big on a pity multiball with Mega Pops for 2 and a half minutes.

Sorry, it wasn’t clear he was running it to me in that post. Normally these things seem to be setup by as casual a player as most entering it.

Oh it definitely wasn’t clear from his post. I just already knew.

Before I got to it there wasn’t even a tilt bob!

Slash wants to be able to throw his game around

You could Mystery ball 1 and see if you get big points (the first tournament mystery award), and use that to hope for Mega Pops; otherwise Super Pops + Multiball.

If you can, tilt balls 1 and 2 to get as quickly as possible to the pity multiball, then you can follow it up with ideally Coma or Axl 3-Ball.

don’t forget to remove the batteries.

Interesting idea- i might have to try this concept at my next tournament. I’m lucky enough to have a GNR at home so I tried a few games with a 3 min timer. I think the best strategy is to plunge “add a band member”, collect another band member while the ball saver is on, drain (if you tilt you lose your band members). Repeat on ball two. on ball three plunge with super pops, start multiball and try to collect the jackpots. The advantage to this is you’ll have a 5 ball multiball to start on ball three. You’ll get a ton more 2m super pops and more chances of collecting jackpots. i got up to 620m doing this.

forget what i said about tilting wiping out band members- just doubled checked and it doesnt.

The winning strategy, performed by a someone who didn’t have a strategy, was to start Matt scoring. He scored over 700 million points. Successful multiball strategies scored around 550 million (successful meaning they got to super jackpot lit, but neither collected it). Those guys ended up as second and third. The fourth place score chose the mystery award and got mega pops, then went into Axl 3 ball and scored over 400 million. 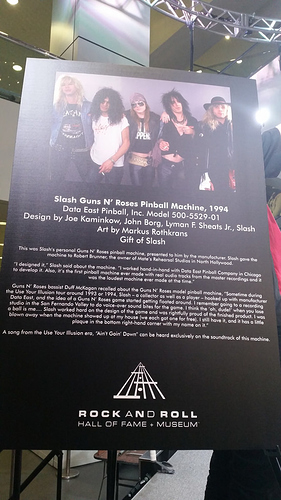 As mentioned above, the top qualifier just attacked the game with no real plan and ended up crushing all other scores with a combination of Matt scoring and Duff jackpots. I’ve never even thought about Duff jackpots, so I was surprised how lucrative they were. Pops were a little soft, so Super Pops scoring was nerfed a bit more than usual.

The top 4 qualifiers then played a final match with no time limit.

This turned out to be a really cool event with a lot of players, about 50/50 split with the local league folks and Rock Hall happy hour crowd. There was an overhead camera on the game so it was definitely interesting to see some pinball novices attack the game all willy nilly and actually put up some decent scores. Even for a lot of the competitive crowd it was their first time playing live on camera with people watching so there were some nerves, plus the tilt was super tight and the stage had a little spring to it. Lots of surprise tilts.

Hey look, Lyman and Borg are part of the permanent Rock Hall collection now! I like how Slash takes so much credit in the design of the game. I’m curious how much of a role he actually had beyond “put in every feature that exists and make it loud!” Any’s 90’s design historians have any insight on that process? 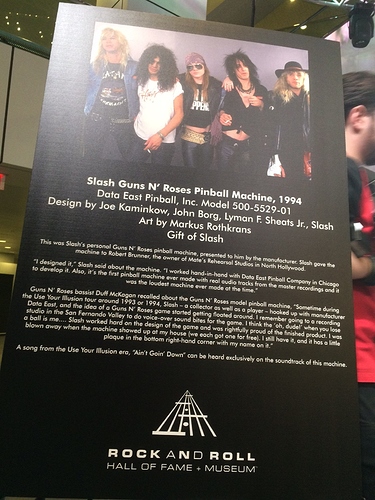 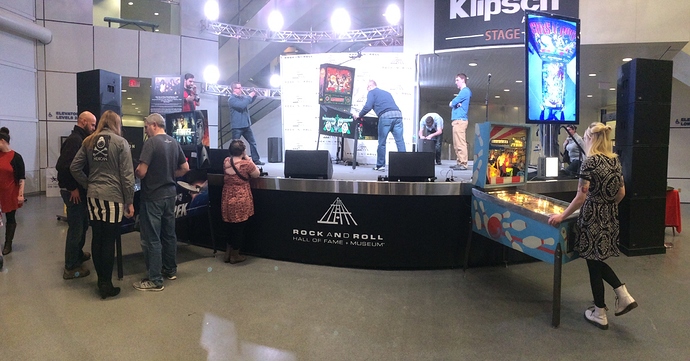 Pretty sure that it was his idea to shape the ramps like a “G” and “R”. Also read somewhere that Gilby sued the band for using his likeness on the backglass after being kicked out. Didn’t I read a post from @heyrocker awhile ago that recalled some details of Slash’s involvement in design?

To Slash’s credit, he agreed to donate the machine under the condition that people got a chance to play it. Was also interesting to note that the little engraved plate on the game (where the price card usually sits) said that the game was from the band’s rehearsal studio. All of the band members got a machine with their own name engraved on the plate, so I kinda feel like Slash still has his own, and donated the extra one he grabbed whenever they closed that rehearsal studio down.

Adding a tilt bob required a series of back-and-forth emails with 3 different members of museum staff. had to send them a diagram of a tilt mech and detailed explanations of what it was, why it was needed, why it wouldn’t change how the game played when the band was playing it, how long installation would take, how much it would cost, etc… Then they photographed me before, during, and after installation (which was done with electrical tape for lack of a tilt clip. PRO GEAR PRO ATTITUDE). During installation it felt like a TD nightmare: A world where suddenly every machine adjustment is suddenly a two day process of paperwork and documentation, and if something goes wrong they find themselves sitting in a court room looking at blown up pictures of themselves nervously fiddling with a tilt bob.

The 3-minute time limit format was definitely fun to try, and I’d like to do it again on a different game (suggestions?). Casual walk-ups got to suddenly be on stage for some ridiculous event where they were getting cheered for under bright lights in front of a crowd with an MC and cameras and so on… Watching people playing in a time crunch is pretty exciting, especially on a game like GNR where the usual competitive strat is kind of a slog when executed properly. Also was definitely easier to keep the attention of casuals and experienced players in the audience when they know each game can only go as long as 3 minutes. We were able to run a 54 player tournament on one machine, and the qualifying round took 2.5 hours! Much easier to have a decent crowd stick around to watch the final round when there’s 54 of them an the entire event is 3 hours total.