Being an ambassador for the silverball

Last night I stopped in a pizza place near Dayton, oh while visiting family. According to pinside they had a TSPP. I’m thinking about getting one and figured I’d get some time in. Turns out they didn’t have the Simpsons but they did have a spider-man. A spider-man that had a right flipper that stuck and a black pf. To make it even better there were a group of kids playing football with a sock in the gameroom.

Now…i was determined so I bought 4 credits (before finding out About the flipper) and started to play. Luckily the replay score was fairly low so I was okay playing handicapped. My first credit I got a replay which caught their attention.

Like a magnet they slowly stopped playing sock football and started watching me play. And asking a lot of questions. Now I will admit they often ‘watched’ a little too closely (a few times covering the pf almost completely trying to point stuff out) but I was excited that they were watching it all. Particularly because I had called a family fun center before arriving at the pizza place to find out if they had any pinball machines. They said they had an Elvis but that was it because kids these days don’t like pinball. And they also mentioned that pinball machines don’t make money. I agreed with the gentleman and said most pinball machines have found their way into barcades but that he was wrong about him not being able to make money. I mentioned that if you do Leagues and tournaments there are a number of great ways that you can keep your machines making money. But I thanked them for thier time and continued on to the pizza place. So it was great to see kids at least someone interested in what I was doing and they also commented that they had played it a little bit and then as soon as I was finished they were going to also play them. So that was kind of cool. So after playing for a little while and racking up a few credits for the kids I was starting to wind down and head out. That’s when one of the parents came in to have them head out. The parent noticed that the kids were watching me very closely and told them to give me some more room because " you see his T-shirt he’s a wizard give him space". It was pretty funny. This is the shirt I was wearing. I hope I inspired them: 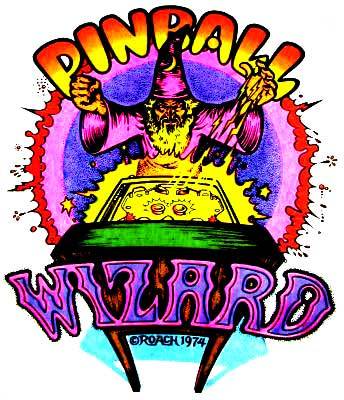 Thanks for doing that. Most people have never seen someone who actually knows how to play pinball. That’s what got me hooked.

The local car wash here used to have a pinball machine [first a Whitewater, then a Waterworld - - see the theme?] that got little play until I starting leaving credits behind for the staff [who learned by watching me when on their break] or other customers as “seed games.” Sadly, it’s gone now.

Hey, folks, if you get the chance, plant the seeds.

Good stuff. Because I play on location a lot and the area I’m in, I see a lot of kids while playing. It’s almost always a positive experience.

One time I had a young kid make me change how I was playing. And he didn’t say a word to me. I was playing a POTC at a sandwich shop and I was going for the GC score. My strategy was simple. Max out jackpot value, then alternate or stack tortuga and heart multiballs. So I was plugging along nicely when I see these three kids headed my way. The oldest, may 7 or 8 tops, is doing all the talking to his younger cohorts. The younger boy could barely see over the side rails and the little girl had to pull herself up to see the playfield. Young kids.

The talker starts telling them all about POTC. Clearly this kids knows his stuff and his friends are listening intently. He points at the ship and says something like: ‘That’s the ship. You can hit it, then sink it. Watch him.’ Then he looks at me.

So I had a choice at that moment. Abandon my strategy and make the kid look like a hero, or stick to my strategy and make the kid look like an idiot. What would you do? Of course I abandoned my strategy and hit the ship. The kid looks at his friends and says: ‘See. Now he’ll sink the ship.’ I was committed at this point, so I went ahead and sunk the ship. What else as I going to do? The kid looked like a genius to his buddies. They walked away with him still talking and the two younger ones looking at him like he was a rock star. I was pissed. I did all the work and this 7 year old took all the credit. Damb kids anyway. d;^)