Bat City Open: Next PAPA Circuit event is this weekend!

http://buffalobilliardsaustin.com/bat-city-open-2016/
Official PAPA Circuit Event!!
Held at Buffalo Billiards in the heart of downtown Austin, TX. See the pictures of the fantastic 2nd floor “Lodge” and “Rec Room” at: buffalobilliardsaustin.com/private-parties/
Guaranteed prize pool starts at over $2,000 through the generous support of Bat City Pinball Club’s new official sponsor: Dos Equis! All tourney entry fees paid back as prize money (after expenses, such as trophies).

Pinball and classic video game free play area.
Pool tables in tournament room will be
All ages welcome (under 21 accompanied by parent).

Hotel: official hotel group rate is no longer available, but contact the Courtyard Austin Downtown hotel and mention the Bat City Open group rate and they may still honor the rate if rooms are available.

Damn, this sounds really fun and flights are almost reasonable. If someone can either put me up for the weekend or split a hotel with me (I don’t snore!) I’ll come!

Colin’s interview on This Flippin Podcast sold me. I’ll see you all there!

If someone can either put me up for the weekend or split a hotel with me (I don’t snore!) I’ll come!

Todd may have some info for you? Not sure if he was going?

If I can get a rollaway, you can split with me; all they had were Kings.

Players outside the state of TX get two free entries.

Volunteers receive 3 free entries for each 2-hour shift they work.

Do we sign up in advance to volunteer or on site?

Flyer for the event: 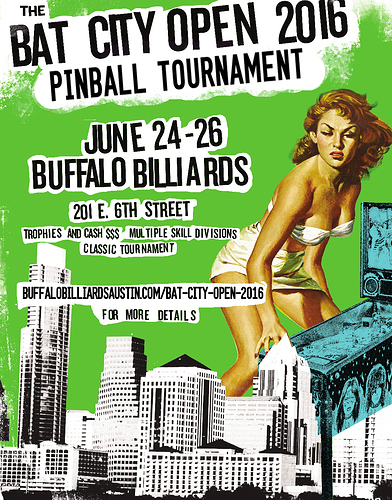 What’s with the Attack of the 50-Foot Woman theme? Strange grade-B (or less) movie, btw, she runs into a UFO one night and grows, then gets revenge on her two-timing hubby and other folks who annoy her. (Saw it on the late late show when I was about 15.) But nothing to do with BATS or Buffaloes that I can see here. So you chose it because, what, she’s got the biggest cleavage ever seen? [I seem to recall another thread about the sexism in pinball backglass artwork.] Just curious.

We went with a retro theme – plenty of cool pinball event posters/flyers with art that aren’t directly related to the city, etc. And that’s the Austin skyline. I can’t take credit for putting together the poster. When you’re here for the tourney, you can ask the awesome Bat City baller that made the arrangements for the poster. I’ll point her out to you.

The Shadow - Murdered out and ready to harvest tears. 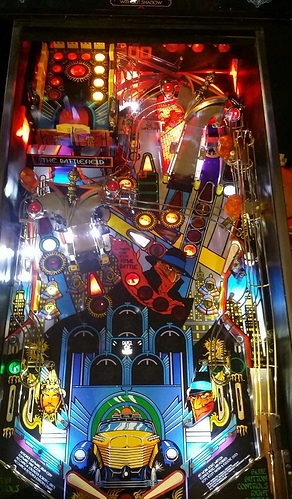 These games are going to be tough!

Super pumped for BCO! It’s gonna be a killer weekend.

To make sure I understand the format, it’s not best 5 games of ten, but score summed across all ten games?

Main Tourney:
Players will compete on a bank of 10 total machines. Only a player’s single highest score on each machine will be counted. Player’s best qualifying points on a total of 6 machines will determine your qualifying rank.

Classics Tourney:
Bank of 6 machines, with a player’s highest score on 4 machines counting toward qualifying.

Credit to Bat City pinballer, Sam Hensley.
Given our sponsorship… 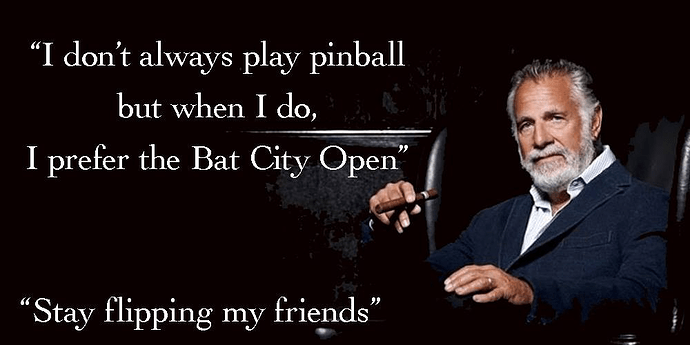