Bat City Open 2017 - My responses and Thanks

Hello all, wanted to start this thread for this years BCO. The web page is live www.buffalobilliardsaustin.com/bat-city-open
The page will have links to some local hotels within walking distance of Buffalo Billiards, a link to a ride sharing company (UBER and LYFT do not operate in Austin) and of course the registration form. Tournament format, cost and events are being finalized and will be announced along with a list of games, in the coming weeks.

We are extremely excited to be back on the Circuit this year, and hope to put on another great show.

Thank you all that voted us back, we aim to make this years event bigger and better.

As an added bonus anyone that registers between now and April 1st will receive $10 in tournament credit.

Apologies, I forgot to add a check box to the registration form. If you registered prior to today, please respond to the confirmation email your should have received, and ask for your credit.

New to the site. I began playing pinball a couple months ago at a local business that has what is possibly the only pinball machine in the entire town

Anyway, I’m thinking this would be a fun thing to go to, it’ll probably be the closest event to my city anyway (which is 6-8 hours away). Any tips? Concerns? Something to know beforehand? Pinball is fun

Anyway, I’m thinking this would be a fun thing to go to, it’ll probably be the closest event to my city anyway (which is 6-8 hours away). Any tips? Concerns? Something to know beforehand? Pinball is fun

If you’re in the neighborhood, definitely consider the Texas Pinball Festival (http://texaspinball.com/tpf/) this month. It’s a huge show with something for everyone.

BCO is great and the locals are awesome, but it’s a very competition-focused event at this time, and we’re talking best-in-the-world level competition. If you’ve been practicing on a couple machines for a couple months I would not expect to do well in the tournaments. If you just want to hang out with other pinheads and get more exposure to the scene both shows are great opportunities.

Seems like a great opportunity! Unfortunately I am not in the area

Would’ve been a great trip had I more time. I live in the RGV area, which is at the southernmost area of Texas, virtually hours away from most major cities in Texas. Corpus Christi is probably the closest major city, though I’m not sure if any pinball goes on there.

Finals- The 16 (24 if we get more than 60 players) players with the most points earned during qualifying will play in the finals. During finals, players will be placed in groups of four and play 3 game sets PAPA style (4-2-1-0). Players must select one game from each era, Modern (2000 or newer), DMD (1990-1999), and SS. The top two players from each group will advance on to the next round, and the bottom two players will be eliminated.

How many games would we be qualifying on?

Brian, currently we are looking at around 15 to 20 games in the qualifying banks. As with most tournaments we are depending heavily on the local community to bring games to round out the banks. Last year we had 12 modern/dmd games in the main bank with 8 games in the classics bank, we hope to expand on that this year.
We hope to have a tentative line up and side event information sometime after TPF.

So far the responses we received for side events indicate a split flipper event during this years BCO would be a welcome addition.
@bkerins, since you can pretty much play everything one handed anyway, you want to be our partner?

Other events up for discussion are:
A women’s division
A children’s 10 and under division
A novice division

Please let us know if you have any other ideas, we are listening.

Tag Team! The old tag team events required players to tag out whenever one of several important shots was made, with the partner standing back a few feet.

Sounds like fun, pretty sure we even have enough room to do that…

Sorry, I am new and haven’t learned anything except how to play the game, can you explain what an unlimited qualifying event is? Also, what do you mean per entry? Thanks for the help in advance to those who answer

Unlimited Qualifying means that people can put in as many attempts as they have time and money to commit to during the qualifying period. Limited qualifying generally means that people are limited to a maximum number of attempts. The Texas Pinball Festival Wizards tournament is an example of a limited entry format - of all participants, everyone only gets to play up to 20 games during qualifying for a fixed entry fee.

In either case, what you’re trying to do is put up high scores on games during this period to qualify for finals. Out of all entrants during qualifying only the top scoring qualifiers (top 16 or top 24) participate in finals. The Bat City open should have separate novice division finals too, so even if you cannot make the very-top, if you’re new you can still play for prizes and prestige!

Each entry is one game of pinball. Last year, most players that fully participated in both Classics and Modern tournaments put in 50-80 entries (approximately $150-$240) during qualifying. You can also get free entries by signing up to volunteer at the event!

The Bats are invading Frisco, TX this weekend for the TPF, questions maybe answered, beers will definitely be consumed, and much pinball shall be played. Hope to see some of y’all around the hall.

After a LOOOONG weekend the the Texas Pinball Festival, we are shifting in to high gear to prepare for this years BCO.

We are happy to announce that Trent Augenstein has graciously agreed to be one of our assistant tournament directors this year, our TD, and stream setter upper/runner, Garret Hayes won the TPF Texas Wizards circuit event, and as some of you may have heard the floor was a TAD bouncy last year, but we have a plan in place to mitigate that this year.

Just a reminder the TILT forums early registration bonus ends this Saturday, April 1st at midnight CST, If you plan on attending register now for your $10 tournament credit.

Since TILT is awesome, we are announcing the first game for the main bank here.
And the first game is…WOZ (standard edition)
Thanks for taking the time to read this slightly long post, and we hope to see you all in Austin.

With about two months to go until the open we are now actively seeking volunteers for the following positions.

Check-in/cashier
Score keepers
Assistant tech - Basically needed for stuck balls. If you have mad repair skills and want to help I will put you to work
Stream commentary - You want to be internet famous? This is your chance!

If you can help out you will earn our eternal gratitude, along with $10 in tournament credit for each 2 hour shift worked, and a Buffalo Billiards shirt for anyone that works 6 hours or more over the course of the event.

Please Email kitchentx@buffalobilliards.com
with BCO in the subject line
Along with the days(s) time(s) and position(s) you are interested in. 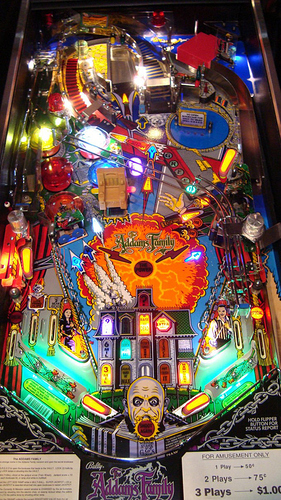 Proposed changes for Addams, note this photo is totally NOT photoshopped

I have to say, I enjoyed playing my Doctor Who with 2" flippers at least as much as with the lightning flippers. Adams Family on the other hand… probably not so much.