I’ve often wondered if there was an advantage to doing 4 player games in tournaments. Or if you would get through games just as fast with 2 players. Seems to me like there might be a little more competition with 4 but no time savings.

I have been contemplating doing a round robin 40 player tournament on 8 machines. Whole day affair where the 24 players not currently on a machine could be socializing, doing side tourney, whatever instead of waiting for the other 3 players to go.

4 player games take more than twice as long as 2 player games. Starting in 2016, that will be reflected in how tournament values are calculated (you get 2x bonus for 4 player games).

By round robin, are you suggesting that each of the 40 players plays every other player?

Pinburgh rounds last around 90 minutes…that’s four player games playing four machines. So, if you have modern games, I think 30 minutes per round is the right amount for 4 player games.

I’d vote you limit it to 32 players, and then play in groups of four. Then all people are playing at the same time. Change groups and machines between rounds, and start eliminating people after a few rounds. (People might not want to hang around if they’re losing every game).

So 4 player games take longer than twice a two player game BUT will result in more IFPA points?

My thinking of doing two players is that there would be less waiting around for your turn, or for that matter people sitting there waiting. With 2 players you are always playing or next. And the people not playing are off doing something else, hopefully fun. I was planning on this being an event where there is other stuff to do, or quick side tournaments (one ball high score, pinball done quick competitions) so HOPEFULLY that would keep the people interested even if they aren’t winning.

I like the idea of going down to 32 people. My thinking of round robin is that it allows everyone to play everyone else and helps prove a players consistency.

Again, my thinking of dong 2 player games is that I see a real disadvantage to having to be that 3rd or fourth player sitting around waiting. Yes, I see now that there will be more points to be had which is one thing. But my focus would be on playing pinball and having fun. No one likes to sit around while 3 other players have 5 minute balls. WHen you are in you’re on, then you have time to hang out.

That said…if I started eliminating people early that could help but I wanted everyone play everyone else. I’ll run a few test matches and see what looks good. Just experimenting and asking the big question…what if. Might find that you are 100% right.

As an alternative…I could do 32 single elimination, take the top 16 in round robin then do playoffs from there. My thinking is with this new scoring system the more people who play head to head the more points. So if I have 32 players who all play at least one game with the 31 other players THEN do finals that’s a lot of games…maybe too many though…

Here are the stats and configuration for City Champ that was just played. The last round must have been closed out after a lengthy tiebreaker, hence the long running time. It’ll give you a decent idea at least. I used MatchPlay, and one nifty feature is the stats page you get from each round/game played. Hope it can help you or others who are planning a tournament. I scheduled 30 minute rounds for 4-player groups, and we ended up something like 35 minutes behind schedule after 13 rounds. Not too bad. 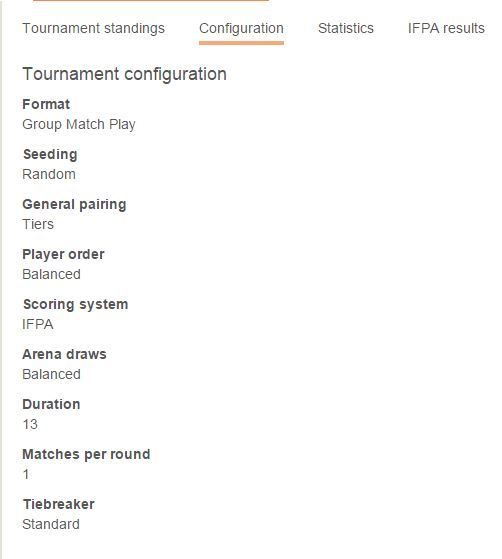 Again, my thinking of dong 2 player games is that I see a real disadvantage to having to be that 3rd or fourth player sitting around waiting.

I usually tell people this is an advantage to group play. Players new to the hobby will always have someone to talk to during matches. In head to head play the new person is just waiting around. Group play is a much better introduction to the hobby

Right before closing the last round the server went haywire and it took me a little while to locate the problem and restart the server. That’s why it’s 20 minutes longer than the previous round

4 player games are unquestionably more social than 2 player games. In two player games, you can’t talk to your opponent because one of you is playing all times.

4 player games feel like less waiting, because you’re actively engaged in the game…wanting to see how your opponents are playing, what scores you need to beat, chatting with other players, etc.

In two player games, people don’t stand around waiting for their next match to start…they leave, go to the bar, go outside for a smoke, or do something else that requires your wrangling them back when it is time to start.

And to be clear, 4 player events aren’t more valuable per se. The 4 player matches take twice as much time, so they’re awarded twice as many points…but you only have time for half as many games. However, in your example…you’re constrained by machines, so it’d basically be the same points regardless of whether you have 2 player games with half waiting, vs 4 player games with all playing.

Ok. I’m starting to see the light in 4p. Now a question of format. If I want something like pinburgh where there is a lot of playing …and ideally I’d love everyone to play all machines and face every player at least once (which is why I was looking at round robin) which format would be prefable. We’ve all seen plenty of match play tournament. Can’t say I’ve seen a lot of RR. But I have yet to be around the block so…hahah

Round robin with the number of players you are describing is not practical. There are just too many matches: with 40 players, that’s 39 opponents, so you need 13 rounds of 4-player games just to get through everyone.

The closest thing to round robin is “pool play” where everyone is placed in a group of 8 or 10 or 12 players, and those players compete in a round robin. At the end of the round robin, the top X players move on to some sort of final bracket. The Dutch Pinball Masters is played this way, with maybe 10 or 12 pools of 12 players per pool.

I’m not saying you can’t do a 40-player round robin, but your players won’t like you for it

Thats why I was thinking of doing an elimination down to 16, then round robin then top 4 for finals…or something. Just thinking in out and around the box

The closest thing to round robin is “pool play” where everyone is placed in a group of 8 or 10 or 12 players, and those players compete in a round robin. At the end of the round robin, the top X players move on to some sort of final bracket. The Dutch Pinball Masters is played this way, with maybe 10 or 12 pools of 12 players per pool.

I’ve been pondering why this format is so popular in Europe. The best I can come up with is that it must be because most major soccer tournaments use this kind of format…

That’s what I thought, too. Pool play for soccer tournaments is standard fare. Also a lot of Olympic competition is pool play.

Round robin works great for me when there are like 14 players or less. I’ll split into one or two groups, and then make up a grid for recording matchups. Then it can just be a self serve…when you’re done with your match, write it down and find someone else you haven’t played. No waiting. No administrating on my part. Pretty good for a tournament director if you want to be hands off.

I should prob start a whole new thread about formats that allow the most play. This one is getting off the original topic.

I just like the idea of the most games being played by the most people. Like pinburgh. No matter what you’re playing a lot!!

Match play does all the RR work for you. I was just seeing that it would be a heck of a long day at 40 mins a round

I’m not following why the time it takes to play a game has anything to do with the value of the game. Wouldn’t a 4p game award more points simply because you are beating more players?

Sorry, I was simplifying. 4 player games will start awarding twice as many points because there are twice as many people playing. (Although I suppose you could argue that you have to beat 3x as many other players as in a 2 player game).

The fact that 4 player games will count for 2 games was the best news for me out of the changes starting in 2016! As a TD I’m always trying to get 100% TGP, or at least close like 76-86%, to entice more players to come, especially out of towners who have travel time and expenses. With the current formula, head 2 head competition was starting to take over due to short length of games to gain another 4%. Problem there is that a lot of players(myself included) aren’t too crazy about head 2 head since it is harder to advance(or seems harder) when it’s just you and one other player. Whatever the format(single elim, double elim, 3 strikes, etc). It just seems easier to advance if you are in a 4 player group and you know you just need to come in first or second. Plus I think 4 player groups are just more fun than 2 player groups.

All in all I have to say pinburgh has prob the best style of play that I’m looking for to do what I have in my head.