2022 NACS forecast for all states/provinces. **NOW WITH PLAYER VS PLAYER PREDICTIONS.**

Next, you need to model the chances that Southwest cancels Escher’s flight to Chicago on Friday morning due to this current winter storm raging across the US…

Next, you need to model the chances that Southwest cancels Escher’s flight to Chicago on Friday morning due to this current winter storm raging across the US…

Oh goodness. Fingers crossed he gets there! That’s definitely a risk of committing to play out of state I hadn’t considered.

Thanks I’ll update with the final batch!

and what about storms that can cancel? / delay the full event in at least one state.
Has not happened yet but weather has been close for some.

If no one shows up due to weather, Josh keeps the money, tough luck. Check the NACS rules, it’s in there.

Oh yeah, thanks for letting me know. I know why this happened, it was specific to Illinois. It’ll get fixed in the next run tomorrow.

I had to drive to Milwaukee and Madison on sheets of ice. Show MUST GO ON!

okay, I updated illinois. let me know if that looks better.

For anyone who wants to help with QA – double check the seeds. This is the most likely place where things can go awry. Thanks!

Update:I reran simulations with a fresh pull of ratings from matchplay. Results may have shifted if ratings changed. I also corrected any states that I was informed had changed, which may have also affected outcomes. If there are any other drop outs, let me know ASAP. Lastly, I have added a new feature that compares each player to all others in the field, so you can see the predicted outcome of all possible matchups.

Enjoy, and good luck everyone! 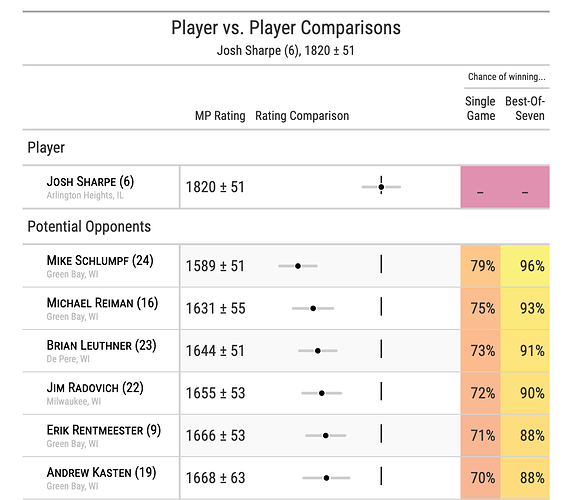 Just want to let you know that you were nearly perfect on your predications for the top 5 in Alabama. The top 5 were nearly exact except for switching Timmy Street with Scott Mount. Amazing!

Would love to see a full chart comparing the projected vs. actual results to see how they compare!
Illinois was pretty accurate, at least for the top 4

Took a quick look at a few players from Texas. Fred Revnew had a <1% chance of winning, yet made it to the finals against Colin MacAlpine, who himself only had a 7% chance of winning. For various reasons I was rooting for Colin all the way, but Fred making it as far as he did is still quite impressive.

On the other end, Wesley Johnson, the nominal favorite to win, got knocked out by Fred Revnew in the quarterfinals; Brian Krivonak, second on the list, got knocked out in the first round by Ray Ford who also had a <1% chance of winning and only a 13% chance of making it to the round of 16.

Not going to go through the whole list… but it looks a lot like once start buttons are pressed and games begin, many of the predictions seem to go right out the window.

Quick and dirty view here. Once this sheet is filled out I can do a final comparison.

Of the 45 states here, 20 of the winners were correctly predicted. Given the strength of the predictions (remember, many of the favorites only had < 30% chance), we would only expect it to correctly predict 19.17. So basically the model is performing exactly as well as we’d expect. All in all, not bad for a simple model. 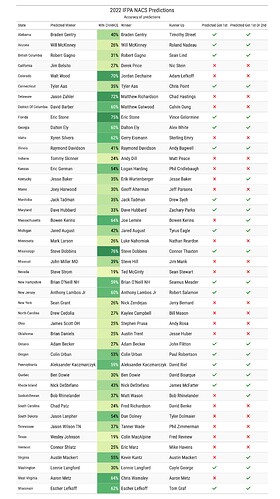 That is actually so good it’s frightening
For each of the 70% predictions it got wrong, one of the 30% came through, and so on. And it all averaged out to the expected average forecasted accuracy. Amazing.